Did a diver film a rare sea monster or the legendary Water Dragon at a depth of 835.5 meters? 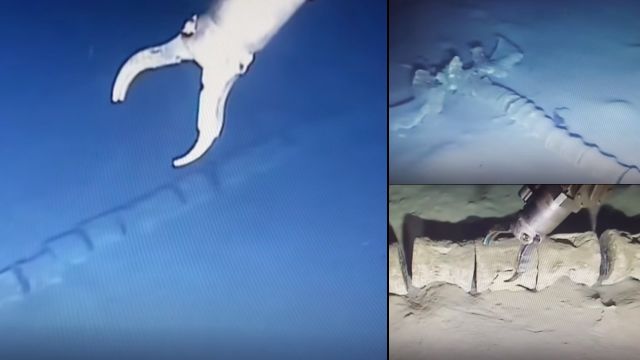 Deborah Hatswell: I was contacted by a gentleman who works with Remote Operated Vehicle equipment for the gas and oil industry. This video was taken in 2017 in the Mediterranean during an investigation of the sea bed by professionals who work underwater in oceans all across the globe. The ROV picked up a strange set of bones on the sea bed. The bones seem to be that of a sea serpent or unknown creature.

They know whale bones and come across them from time to time. The dimensions of the skeleton on the video does not fit with the usual size for any sea life in the area. A whale has three blades on it’s spinal bones each spaced 120 degrees apart and this creature seems to have only two.

The Mediterranean sea does join the Atlantic ocean so this creature could have come here from that ocean?

The gentleman who contacted me stated “The bones could be very A̳n̳c̳i̳e̳n̳t̳ because I have seen many clay amphora sticking out of the mud and they have been there for potentially 1000’s of years. The bones were about 30 meters long and very large and look more like they belong to a serpent of some kind”