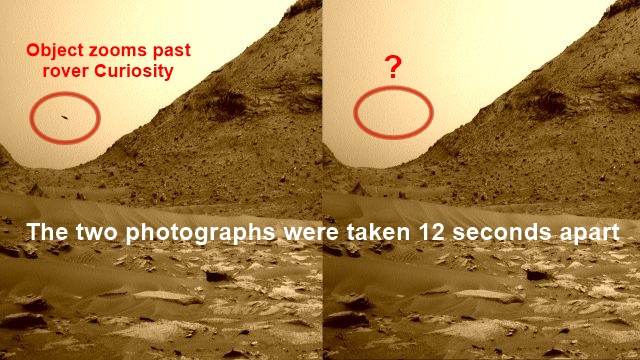 Seen in these photographs is what appears to be an atmospheric anomaly; something like an object moving across the field of view of the rovers camera.
Upon closer inspection it looks like the right part of the object is moving faster than the left part as there is motion blur on the right-side. Or could this UFO-like object be emitting smoke?
Also featured, two more examples of atmospheric anomalies photographed by Rover Curiosity in the past.
Links:
https://mars.nasa.gov/raw_images/1126107/?site=msl
https://mars.nasa.gov/raw_images/1126108/?site=msl
Post Views: 88
Tags: Unknown space object zooms past Mars Rover Curiosity