The seriously ill 75-year-old Teresa had been dying of cancer for several months and one day her daughter began to persuade her to go to the hospice. At that moment, the surveillance camera filmed a video of the ghost of the late husband Teresa coming to the veranda.

In Norma Will’s house there are security cameras with motion detection. One of them is on the veranda. And one day it filmed what the woman considered the ghost of her dead father (see the video below).

On the evening of November 27, 2019, the veranda camera turned on and filmed how a translucent foggy silhouette, similar to the figure of a man, sits on a swinging chair and then it immediately begins to move.

According to Norma, this swinging chair on the veranda was her father’s favorite resting place during his lifetime.

When Norma’s mother, 75-year-old Teresa, saw this video, she said “He came for me.” Teresa died shortly thereafter.

Before that, she had been seriously ill with cancer for two months, which was already at such a stage that the treatment did not help. Norma Will had been caring for her sick mother all these two months.

The night this video was filmed, Norma and her mother had a very serious conversation. Norma tried to convince the sick mother to go to a hospice, where she would be looked after by professional nurses. 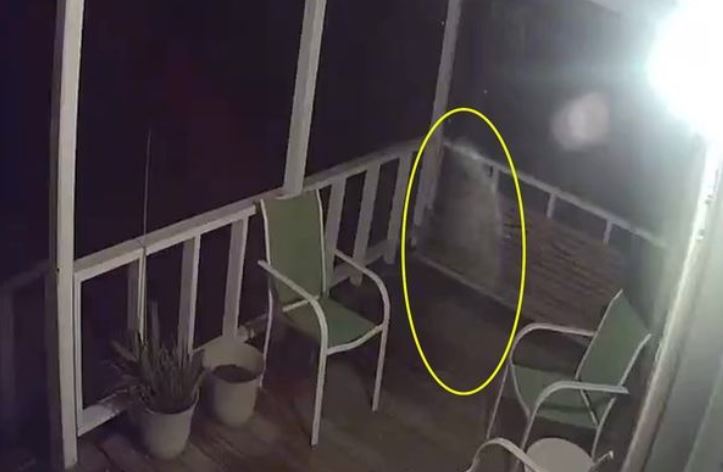 Teresa replied that she had to go “for a minute” to her bedroom to consult with her husband Leandro. Leandro had passed away ten years earlier.

When Teresa went to her room, Norma’s phone immediately received a notification that a video surveillance camera on the veranda had recorded movement and filmed it. When Norma saw the video, she immediately remembered that her father, during his lifetime, always went out to smoke on the veranda and sat in a swinging chair.

She decided to show the video to Teresa, and her mother immediately smiled when she watched it. She said that it was her late husband and that he had come for her.

Teresa passed away from cancer and Norma Willa now 100% believes that the ghost of her father really got on camera and that the afterlife exists. Because of this, she now feels “calm and reassuring.”

“It’s comforting to think that my father was watching both of us,” says Norma. In addition, now Norma believes that she clearly feels the presence of her father and mother in the house, as if they are always with her.