They didn’t any modifications in their replica, keeping the exact aerodynamic characteristics of the Inca objects that were proven actual replicas of 100% functional aircrafts, after the stunning successful test.

This is truly amazing!! Two German aeronautical engineers, Algund Eenboom and Peter Belting, dug the Inca artifacts back into scene, built a propeller-powered scaled replica of one of the artifacts and performed a flight test in 1997, during the Ancient Astronaut Society World Conference in Orlando, Florida.

Frontier scientist Richard Hoagland’s research team The Enterprise Mission pointed out another relatively new and interesting development in the proof for a lost technological society.

Among other points, Hoagland et al. discuss the recent findings of German scientists Dr. Algund Eeboom and Mr. Peter Belting. Several small gold trinkets have been recovered from tombs of the Incas, dating back thousands of years.

These trinkets clearly depict structures that undeniably appear to be workable flying airplanes, complete with what appear to be gun turrets on some of the wings.

Hoagland et al. also point out the far more well-known fact that working bird-shaped gliders have been found within tombs in Egypt. Since these gliders also possess remarkable similarity to working airplanes and are capable of long flights when thrown, we must assume that the ancient Egyptians were also well aware of this technology.

With the evidence now seen from the Incan tombs above, we may suppose that the bird gliders were simply children’s toy models of systems that were in much more common use at one time.

And so, if we are seeing workable airplane models being built as small gold statuettes and wooden models in two different ancient cultures separated by the Atlantic, we certainly can assume that a large-scale technological society with full-sized, working aircraft may have been in existence at one time as well.

It is frustrating that we have not found any full-sized models. However, after a hypothesized 12,500 years of time passing, we should expect that any such structures made of wood or metal would have long since deteriorated.

The Atlantean lore from the Edgar Cayce readings states that almost the entire concentration of that society was on an island in the Atlantic that included present-day Cuba and outlying areas as well, and which subsided under ocean waters, known as “Poseidia.”

And if the modern toys of our society were suddenly subjected to a vast cataclysm and promptly left unattended for 12,500 years, the savage action of tidal waves, land subsidence, rust, tornadoes, hurricanes, rising sea levels, glaciers, natural disasters and all other forms of growth and decay would most likely completely wipe out all remnants of things such as wooden houses, hollow buildings and skyscrapers of glass, and metallic automobiles, trains or airplanes.

So, therefore, despite their toy-like appearance, which may indeed have been the playthings of children at one time, these tiny gold statuettes could well have been considered very sacred objects – some of the sole remaining fragments of a culture of “Gods” destroyed in the seas of Time.

These precious models were held onto and possibly copied over and reduplicated for thousands of years by the survived “Atlantean” cultures of the Incas and Egyptians before being buried in their tombs.

They may well have been the direct symbols of a lost “time of the Gods” when humankind had conquered the skies and could fly around at will, with the gifts of advanced technology.

Many archeologists dismissed the find as merely being reproductions of “insects”. However, it was pointed out that insects do not possess a “vertical stabilizer”. The conclusion, according to Eeboom’s impressive statistics: the ancient craftsmen really meant for their miniature “airplanes” to look like … airplanes!

Peter Belting approached the problem from a “hands on” point of view: he actually built scaled-up (but otherwise precise) models of the ostensibly “miniature aircraft” — and then attached propellers and jet engines. 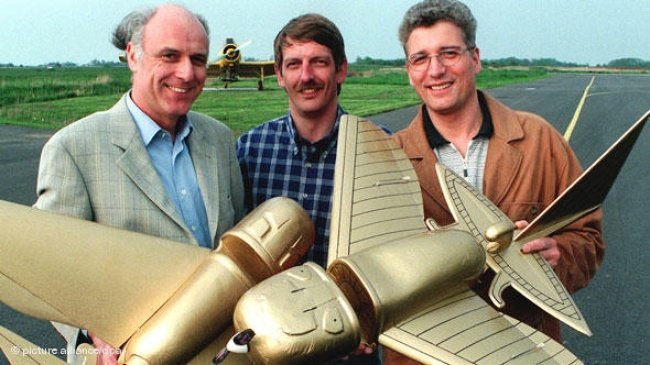 At the August, 1997 meeting of the ” Ancient Astronaut Society World Conference,” gathered in Orlando, Florida, the two researchers presented their independent findings on the “insects.”

Those assembled literally cheered when Belting’s model (powered by a small jet engine — left) flew a set of complex aerodynamic maneuvers … and then came in for a perfect landing — all with a model airplane built as an exact match to a tiny gold trinket found in an Incan grave … dated minimally to over a thousand years ago!

Then, in case anyone still doubted, Belting and Eeboom took everyone out into the parking lot of the Orlando Florida Mall … and once again, put the “thousand-year-old” (if not far older …) jet-powered aircraft through its paces for the astonished crowd.