The strange event happened near Le Bourg-Dun, Haute-Normandie in France when a photographer captured several colorful glowing discs in the night sky. 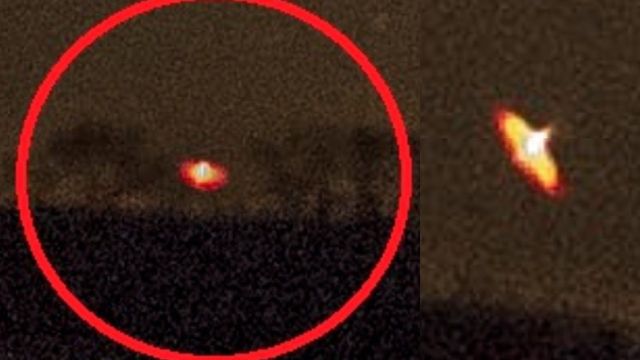 The photographer was on a plain path with his photography equipment (Nikon D600 & Nikon 28mm F1.8 lens plus tripod and wired remote control) for a night landscape session.
He arrived at the place near Le Bourg-Dun, Haute-Normandie at about 10.30 pm, took several pictures of the landscape when a bright colorful disc-shaped light appeared on the northwest horizon for a few seconds.
A few seconds later, another similar light appeared, but much closer to its observation site, when it suddenly brightened to orange-red light as it floated for about seconds before disappearing.
Then, a few seconds later, another colorful disc-shaped light appeared, but this time there were two of them, floating and visible for about 10 seconds. The entire observation of these lights took about 40 minutes.
Later, while checking the internet for these strange anomalies in the night sky, he was surprised to learn that several other people in France had also seen them, but at different times of the night.
Since the event took place a few days before New Years Eve on December 28, 2016, we may wonder whether these strange lights may have actually been fireworks.
However, we may assume that the photographer should recognize fireworks, but he did not talk about it, indicating that he has seen something that is inexplicable to him.
Take a look at the images…
Post Views: 513