This footage was filmed in the CIC (Combat Information Center) of the USS Omaha on July 15th 2019 in a warning area off San Diego by Visual Intelligence Personnel (VIPER team). 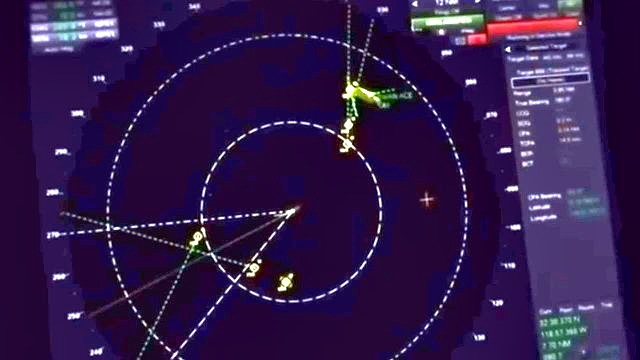 This RADAR data release shows four clips; multiple unknown targets (and one civilian vessel). Some of the unknown targets drop off RADAR in this footage.
This happened numerous times throughout the UFO encounter series. At the height of the contacts – there were at least fourteen unknowns observed at one time. The event series reached a crescendo with one of the unknown targets entering the water at 11pm. No wreckage found. None of the unidentified craft were recovered.
Transcription
:01 “OOD if you can write a general LAT/LONG of where we’re at.”
:03 [faint voice] “We do have some X-band RADAR tracks…”
:05 “Yes Sir.” :06 “And then… the number of contacts you’ve got. Get the course and speed meters off ’em.”
:09 “Copy.”
:10 “You know what I mean? In relative position to us. And bearings. Might be helpful too.”
:15 “Eyes up.”
:16 “Eyes down.”
:18 [intercom] “CSM TAO, maintain track, maintain track as best you can.”
:24 “Track 781 just sped up to 46 knots. 50 knots. Closing in.”
:33 “138 knots. Holy shit. They’re going fast. Oh, it’s turning around.”
:36 “That one’s pretty much perfectly zero zero zero relative, right?”
:39 “Yeah.”
:40 “263 at 3 miles. 55 knots, speed.”
*OOD (Officer of the deck) / CSM (Combat System Manager) / TAO (Tactical Action Officer)
“The most impressive evidence we witnessed was their endurance. The event lasted over an hour with all contacts just disappearing. We were never able to discern where they departed to.” – Crewman, USS Omaha.
Post Views: 561