What has made him a minor legendary figure in ufological circles is the fact that there are some who think he may have achieved his desire.

Taylor lived with his mother and stepfather, Grace and Jim Taylor, on a farm in Duncan, British Columbia. Granger was always something of a prodigy—“an eccentric genius” in the words of a friend. His particular talent lay in the field of mechanics.

There seemed to be nothing he could not build or fix. When he was fourteen, he built from scratch a one-cylinder car. Three years later, he was overhauling bulldozers and locomotives.

Eventually, he put together his own airplane. He dropped out of school in the eighth grade. He subsequently worked for a local mechanic, but soon quit the job. Thereafter, he followed a semi-reclusive life at home, dreaming his own peculiar dreams.

Those dreams soon centered on UFOs. Taylor became an obsessive student of the topic, ardently searching for some key that would unlock the mystery of alien sightings. He even built his own “flying saucer.”

He would spend hours inside the contraption, brooding over the question of galaxy travel. Taylor had no doubt that extraterrestrial visitation was real. He just couldn’t figure out how the aliens did it.

In 1980, he told friends that he was finally on the road to success. He confided that one night while he was lying in his do-it-yourself UFO, aliens made telepathic communication with him.

When he asked how their spaceships operated, all they would say was that “it was magnetic.” However, he added ecstatically, these space visitors promised to pick him up for a guided tour of the cosmos. They would give him a certain day and time when they would start.

No one knew what to make of this. His friends reassured themselves that, no, he couldn’t possibly be telling the truth, but…as one of them later said, “He was such an unusual sort of guy.” 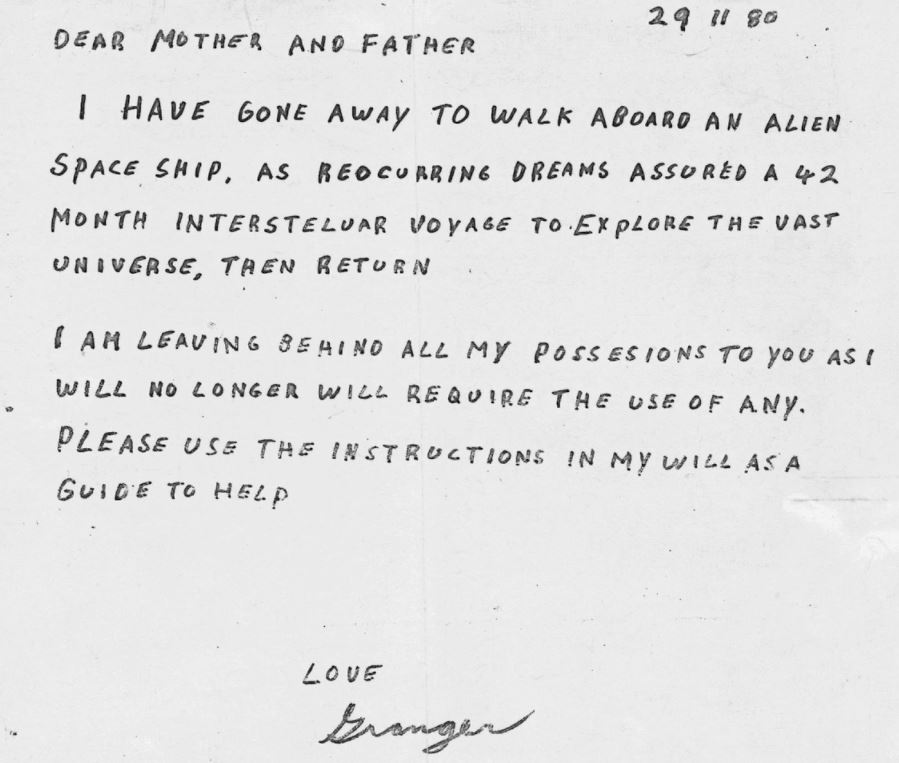 On November 28, 1980, he sat his stepfather down for a serious talk. He wanted Jim to know that he had been a great parent, and Granger was grateful for that. (His mother was vacationing in Hawaii—a fact that she would later bitterly regret.) The young man then wrote out what amounted to two wills, referring to himself only as “departed” rather than “deceased.”

The next day, he wrote out a note for his parents, saying, “I have gone away to walk aboard an alien spaceship, as reoccurring dreams assured a 42-month interstellar voyage to explore the vast universe, then return. I am leaving behind all my possessions to you as I will no longer require the use of any. Please use the instructions in my will as a guide to help.” The other side of the note contained a map of nearby Mount Waterloo.

And then thirty-two year old Granger Taylor, along with his truck, disappeared. The question of what happened to him has never been satisfactorily resolved. Six years after he vanished, a few human bone fragments and metal debris judged to be pieces of Granger’s truck were found scattered around a site about eight kilometers from his home.

At that same time, it was revealed that some explosives Granger had (legally) owned were missing. A coroner’s jury made the assumption that these bone fragments were all that remained of the missing man, and ruled that he had blown himself up—why he would do such a thing, no one could say.

Mystery more-or-less solved? Was this “eccentric genius” merely a self-destructive lunatic? Not everyone is convinced. It has been pointed out that these minuscule remains were never indisputably identified as Taylor’s.

There are people who like to think that he is still out there in the universe, having the road trip of his—or any other earthling’s—life.

Jim Taylor was one of them. In a newspaper article about the mystery (“Is Vanished Son Adrift in Space?” “Times-Colonist,” March 18, 1985) he is quoted as saying wistfully that he found it hard to believe his stepson is hitching a ride in a spaceship, “But if there is a flying object out there, he’s the one to find it.”