The United Arab Emirates. C̳h̳i̳n̳a̳ and NASA each launched their spacecraft to the planet Mars about seven months ago. 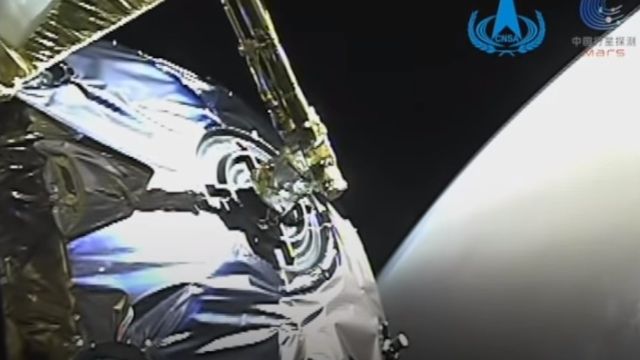 Now, C̳h̳i̳n̳a̳\’s Tianwen-1 has entered the orbit of the Red Planet on February 10, 2021 after an interplanetary voyage covering nearly 475 million kilometers.

C̳h̳i̳n̳a̳ National Space Administration has unveiled complete footage of the first Chinese Mars probe, Tianwen-1, as it was captured by the gravity of the Red Planet.

The footage reveals Mars coming into view, the slight vibration after engine ignition, and its flight from the daytime into the night. It also shows a clear image of the solar wing, the directional antenna, and Mars atmosphere and surface topography.

Two days before, on February 8, the United Arab Emirates Hope craft has successfully entered the orbit of Mars and NASA\’s Perseverance rover is scheduled to land on the Red Planet on Feb. 18, 2021.

While UAE\’s Hope craft will stay in the orbit of Mars to study the atmosphere of Mars, the main job of C̳h̳i̳n̳a̳\’s Tianwen-1 which includes a Mars orbiter, a lander and a solar-powered rover and NASA\’s Perseverance rover is to seek signs of A̳n̳c̳i̳e̳n̳t̳ life and collect samples of rock and regolith for a return to Earth on another mission.