UFO researcher Anthony Bragalia is known for his meticulous investigations and searches. And he managed to attract many witnesses to various episodes related to UFOs. But most of them are witnesses of events directly related to the UFO crash in Roswell.

The daughter of a WWII officer with the notorious “Hell’s Angels” 303rd Bomb Unit states that her father was later associated with Intelligence and with Wright Field.

It was there that he was assigned to intimidate and silence witnesses and to retrieve any debris held by private individuals from a fallen extraterrestrial craft near Roswell, NM in early July 1947. His violent actions may have even led some to their deaths.

We present for you an article that Bragalia wrote on this topic.

Michelle Penn (married name withheld) of Great Falls, Montana, told this author that her father was one Hunter Glynn Penn. Penn (who would also use “Glenn” as his middle name to avoid confusion) was a 2nd Lieutenant and bombardier on the famed B-17 Flying Fortress with maiden missions in the European Theatre during World War II.

As a Hell’s Angel, Penn (who died in 1993) was part of a very special group. Historian Gary Moncur, whose father was also a Hell’s Angel, remarks that only those made of “tough stuff” would be chosen for these missions. 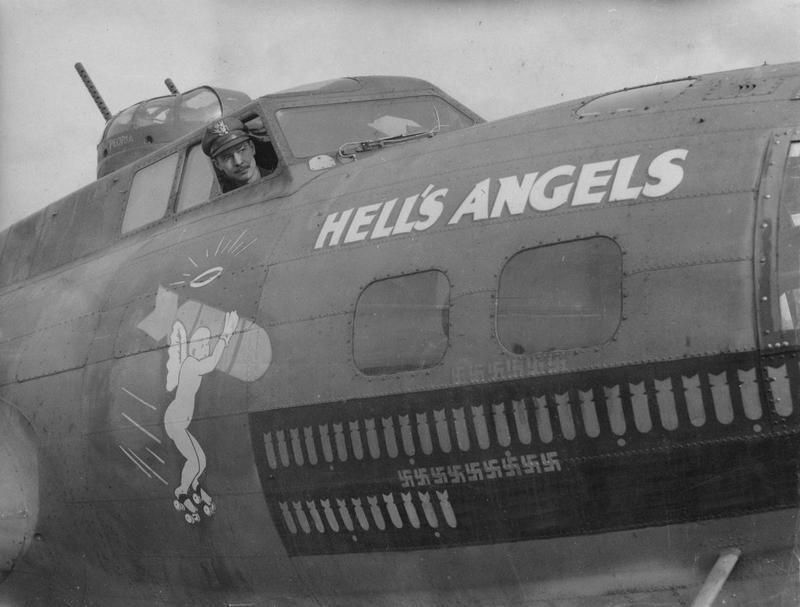 They could be counted on for the most dangerous assignments. Among their ranks were brave misfits and fearless malcontents. Those like Lt. Hunter Penn.

Penn (service number 443724) flew briefly in the European Theatre and then assumed other roles within the 303rd when he returned. His service years are confirmed to have included 1942, where he was part of what historians call “The Dangerous First 30 Missions” of the Hell’s Angels bombing campaign, ultimately comprising 364 missions from 1942 to 1945.

Michelle told me that his service records are spotty and key documents are missing. Indeed, Penn’s military records appear to have been destroyed in a mass fire “mishap” in 1973 where they were stored by the National Personnel Records Center in St. Louis.

Hunter’s known service was culled by me through deep online research and military unit historical websites. Additionally, Michelle says that after the War he was “in some way” associated with Wright Field (Wright-Patterson) and that he was also in Intelligence.

Later in life, Hunter Penn worried that his mission to silence people may have resulted in the ultimate silence of death. He tried to muzzle those who had seen things they shouldn’t. He tried to retrieve by force any pieces of physical evidence of the crash, including pieces of unusual alloy or memory metal held by townsfolk or ranchers.

​Michelle said that her father was a habitually cruel individual and father, a high-functioning heavy drinker. He was demanding and physically imposing.

He was a very intelligent man. Perhaps smart to the point of madness. Sometime after his service, Hunter lost one of his arms in a “shooting incident.” Rather than electing for a prosthetic arm, Hunter chose a menacing-looking hook arm, a claw.

Michelle did not know if her father was telling her this part of the history of his life to scare her into a state of life-long respect and obedience, or to get it off of his shoulders, or both. In the early 1950s she overheard conversations between her mother Ivy and her father about an event during his service that he had regretted. It was about his knowledge of the crash and his role in covering it up. This overheard conversation about the crash was decades before all of the revived public interest in Roswell, the published books, etc.

That he was part of a group given assignments with case names. One of these was the Roswell case, and his objective was to secure debris and silence surrounding the crash of a spacecraft and its occupants from another world.

He told her that people who did not comply with him would have to deal with intimidation by his use of a weapon. Hunter was weapons-crazy, and his favorite weapons were sharp ones that could be swung, like an ice pick (for which he earned the nickname “The Iceman”).

He brandished a pick axe and swung out maniacally at those who defied him. They then did anything he asked of them.

He would open up structures and containers with that pick until people who has been holding back finally would surrender the debris materials and swear that they would never say anything to anyone ever.

Some time later, Hunter would weep the past. He would cry out about what he did. In Michelle’s words, “[He told me] they were authorized to use whatever means necessary, and they did. They wanted nervous breakdowns and suicides.” Even the hardened Hunter was showing cracks of emotion in recounting his Roswell assignment.

He told her that he may have even murdered people. He said that he may have “heart-attacked” people to their death with his axe-wielding actions. Extreme stress, especially brought on suddenly, can induce cardiac events in susceptible individuals.

This is why one never frightens a heart patient. To do so could bring on their end. An end that Hunter Penn now feared he had brought on to those at Roswell who would not do as they were told.

Officers like Hunter in military units like his were trusted. He was ardent and loyal. He took orders. He was a “no questions” kind of guy and he both respected and administered authority. He was mentally tough and unafraid. He was imposing and fearless.

Additionally, he was difficult to trace as a silencer and retriever of crash artifacts. He had no relation to the Roswell base or prior association with the townspeople. They did not want to assign someone who could be identified by residents.

It made sense that the silencing mission and errant debris search surrounding Roswell utilized some officials who were known to the townsfolk, and some who were unknown to them. Those known to them would play “good cop” and would strongly persuade and perhaps even warn.

But with no ties to the area, Hunter was free to play “bad cop.” He was an enforcer who would even commit assault with a deadly weapon to obtain compliance.

Finally, as indelicate as it may sound, Hunter had already killed. And he did so in unfamiliar surroundings, conducting aerial attacks on lands thousands of miles away from his native Kentucky.

Much of what Hunter’s daughter maintains about her father was supported by Jeanne Penn Lane of Kentucky, who passed this past December. Jeanne was Hunter Penn’s niece and Michelle’s cousin. I had the opportunity to dialog with her several months before her death.

She knew Hunter and Michelle very well when she was a child and then as a young woman. Jeanne (who operated the oldest continuously-operating General Store in the US) confirmed that Hunter was Michelle’s father, and that many of the things that Michelle said of him could well be true.

She did shock me however, when she explained that “Michelle” is actually Cheryl Penn and that Cheryl is not Hunter’s foster daughter (as previously believed) but that she is actually the Penn’s biological daughter.

Though this may initially cast doubt on Michelle’s story about her father and Roswell, it actually strengthens it. We agreed that Michelle left her hometown as soon as she could, and there was a reason that she started using a different first name, and preferred to be known as the foster daughter of Hunter Penn rather that his biological daughter. It was a way to help remove the pain. Distancing oneself from such pain does not diminish one’s credibility.

Jeanne confirmed that her Uncle Hunter could at times be very mean. But he had an occasional fun side, she said, like the time when they enjoyed a ball game together. But there was also the time that she witnessed him publicly slap the cigarette out of the mouth of an under-aged smoker, a boy he did not know.

She said that he loved weapons and his claw-hook arm. This, she said, made him all the more intimidating a figure. Hunter later moved out West from rural Kentucky to strike a fortune in California property development in the 50s-early 60s.

He did not, however, manage funds well, and in later years lost much of his net wealth. Jeanne said of her aunt Eve (Michelle’s mother) that she was a self-centered parent who enabled his cruelty and sided with Hunter because she liked his money.

Though she heard nothing herself about Roswell or his involvement, Jeanne said that he was a no-nonsense type of person who could be entrusted with secrets.

ANOTHER TOUGH WWII VET SILENCES THOSE IN ROSWELL ABOUT THE CRASH

Corroborating the idea that entrusted, fearless WWII vets like Hunter Penn were used at Roswell to enforce silence about the crash is the story of Roswell’s City Manager in 1947, C.M. Woodbury.

Known during WWII as the highly-decorated “Iron Major,” he was regarded as a no-nonsense individual. He was also close to Butch Blanchard, the Roswell Army Air Field Base Commander.

Though he did not physically intimidate anyone, Woodbury did visit the Roswell City Fire Department after the crash. About ten years ago, JC Smith, one of the firemen, told this author and researcher Kevin Randle that Woodbury came in unannounced and told the men that if they heard anything about a crash north of town, that they were not to go out there.

Woodbury was very firm with them: there was no need to respond and that everything was “under control.” Whereas the military employed a local to act as “good cop” in “leaning” on people like the Fire Department and Sheriff George Wilcox, they used a person like Hunter Penn as “bad cop” to actually threaten by force to achieve compliance.

Key to Michelle’s credibility is that she did not contact me – I contacted her. While conducting research that involved deep Googling, I noticed a brief mention by her many years ago on the net (now gone) that her father had told her he had some sort of adverse involvement with certain Roswell UFO witnesses.

She did not expand on it much more than that online, and I reached out to her by phone and email to learn more. She sounds very articulate, level headed, and frankly, believable. A mother, a wife and a responsible woman with a strong intellect.

​
Tearing up things in search of any debris material held by ranchers or others has been previously reported to researchers. In the mid-2000s, Fawn Fritz, the granddaughter of ranch manager William “Mack” Brazel, and daughter of his son, Bill Brazel Jr., related such a story to researchers and authors Tom Carey and Don Schmitt.

Fawn reports that some of her father’s place was “trashed” right in front of him and that “feedbags and floorboards were cut open.”

Sounds like the work of some monster who likes to swing a pick axe. Someone like a Hunter Glynn Penn. The scientist suggested when humanity will find extraterrestrial life