According to Egyptologist Bassam El Shammaa’s 2007 study, there was a “second sphinx” on the Pyramids Plateau. El Shammaa said the famous half-lion, half-man statue was an Egyptian deity constructed close to another Sphinx that has since been vanished without a trace. 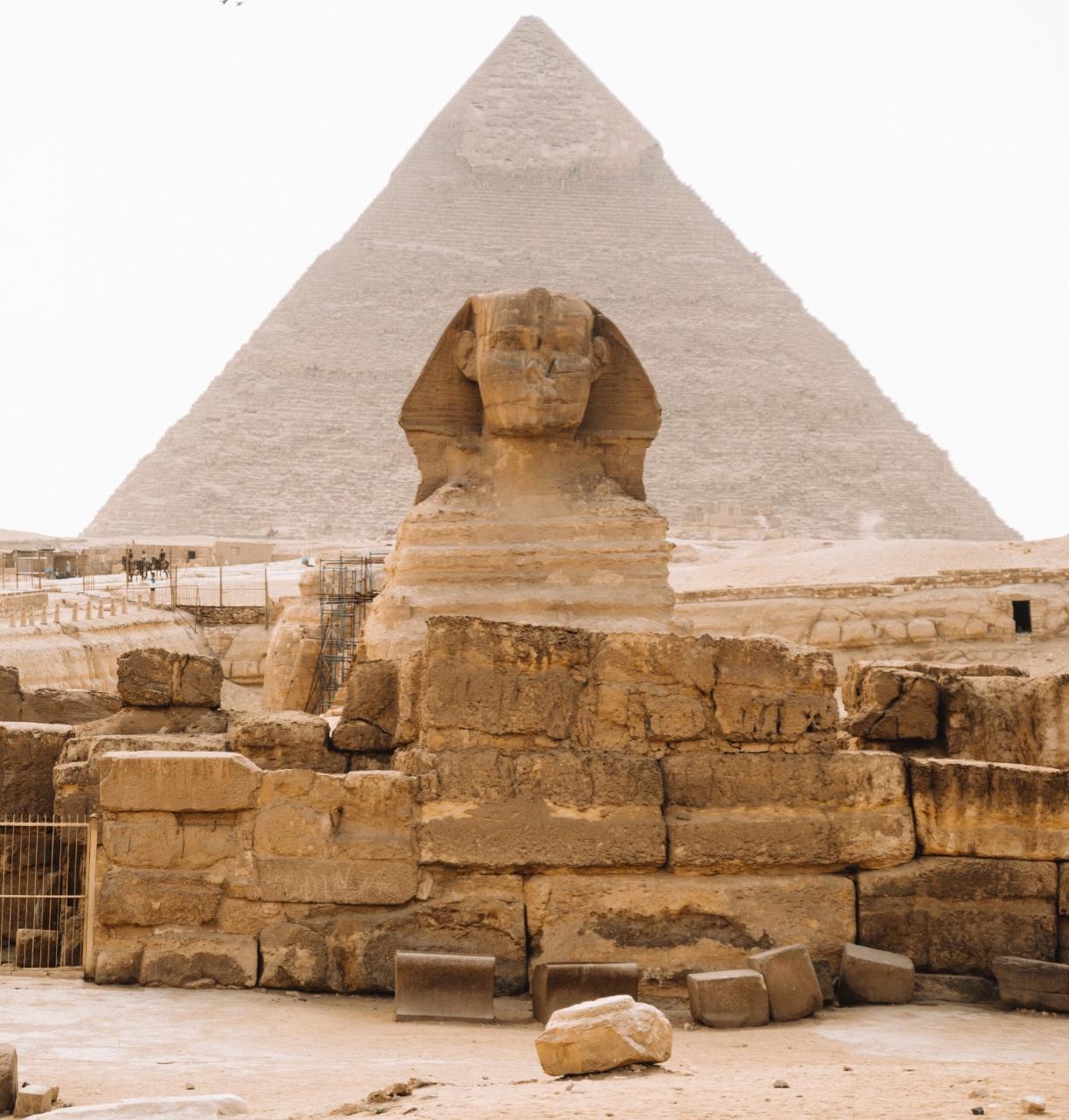 Today, our attention is focused on the most recent attempt to discover the true A̳n̳c̳i̳e̳n̳t̳ story of an advanced c̳i̳v̳i̳l̳i̳z̳a̳t̳i̳o̳n̳ that left us with great wonders above and below the Giza plateau sands. 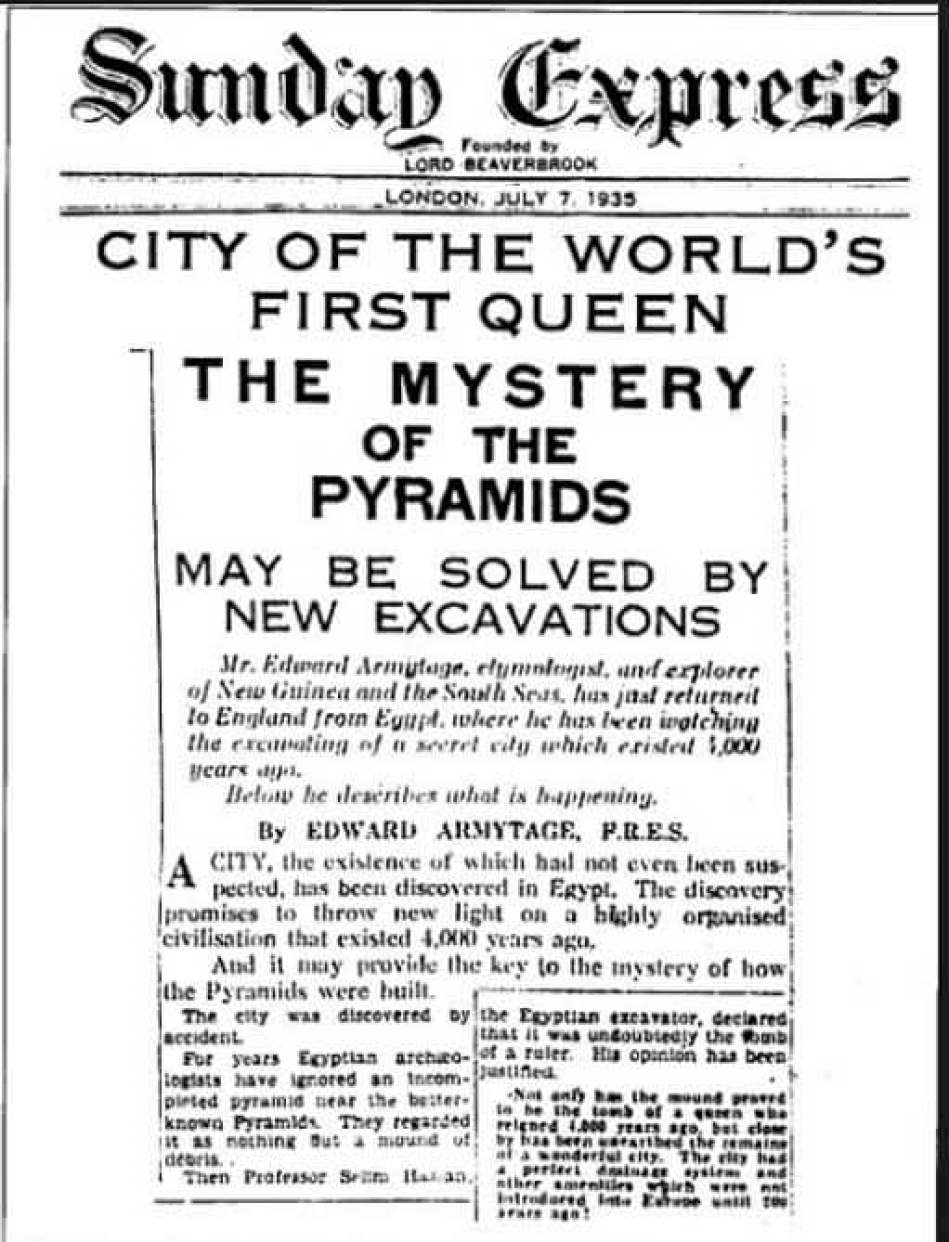 The earliest reports of a “S̳e̳c̳r̳e̳t̳ City” appeared in the World Press in the first week of March 1935. Many more were discovered in July of that year, and the Sunday Express carried an article by Edward Armytage, who had just returned from Egypt to England, where he had witnessed the excavation of an A̳n̳c̳i̳e̳n̳t̳ Egyptian metropolis thought to date back 4,000 years.

Following then, there was stillness, as if every Egyptologist alive had lost interest in this fantastic underground metropolis. Throughout the years that followed, all of his articles focused on tombs of queens and arrows. Surprisingly, at one point, such a massive find of an entire underground metropolis dating back at least 4,000 years was completely ignored.

That was about eighty years ago and today we are faced with a similar ‘granite block wall’, in the person of former Minister of State for Antiquities Affairs, Zahi Hawass, who held this post until the Egyptian revolution in 2011, which toppled Hosni Mubarak – and also ended Hawass’s controversial reign as the supreme head of all antiquities in Egypt.

However, he retains his power – and it is not a little one. Much has been written about the Egyptian ‘Indiana Jones’ (Zahi Hawass), who smiles large one moment and goes crimson with rage the next when he is questioned. This aspect of his personality is widely chronicled in the book “Breaking the Mirror of Heaven” by Robert Bauval and Ahmed Osman.

However, such attitude does not explain why Zahi Hawass has publicly said that there is nothing beneath the Sphinx, no tunnel, or a single chamber, despite several photographs of him entering the lowering pits of the Sphinx’s head and another in the rear of the body the lion. Should we ignore what we’ve seen several times before and accept such denials without question? 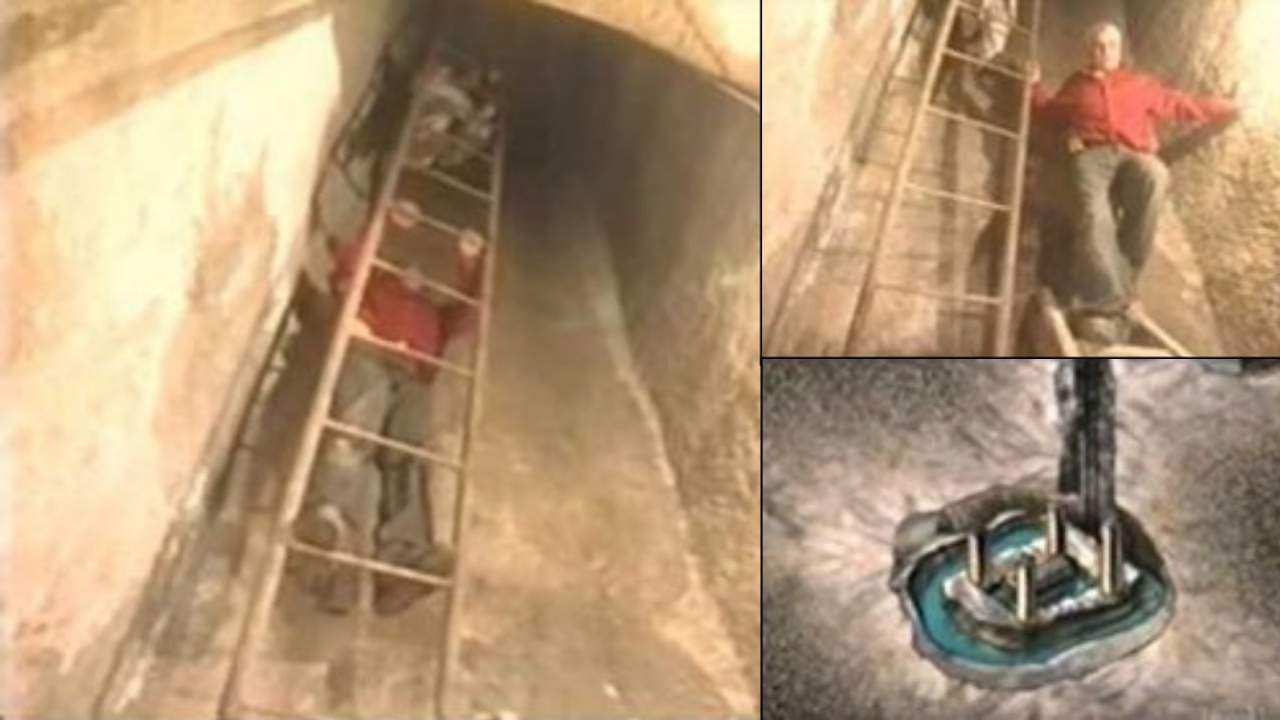 He appears to have ignored queries concerning underground tunnels underneath the Giza plateau and chambers beneath the Sphinx, claiming that it was impossible to investigate deeper since the rooms were either sealed or filled with water. This might be true, however we can see in one of the images of a posterior axis descending on the Sphinx’s side that the ground is extremely dry.

We know that Hawass climbed the steps from the Sphinx’s rear entrance, into a deep room, and then farther down to a lower chamber containing a very big sarcophagus and filled with water; these events are all seen in a documentary made by Fox. It’s difficult to conceive how he could subsequently refute what he’d said and done.

A hole in the Sphinx’s head 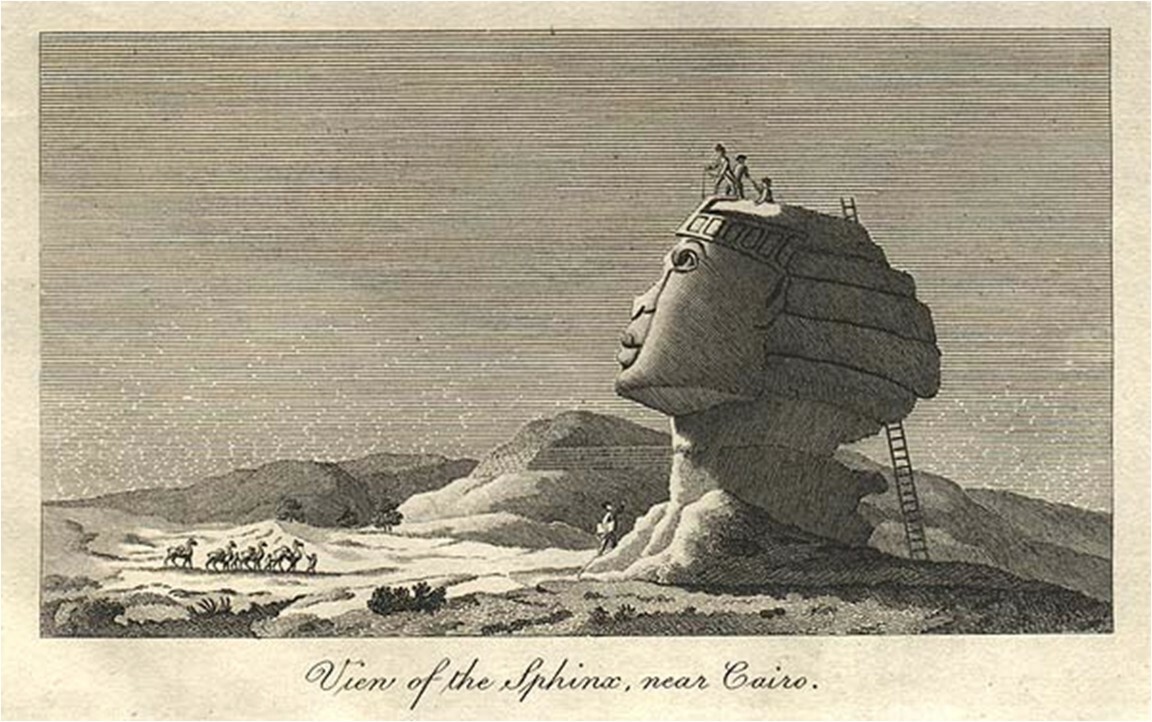 Vivant Denon made a sketch of the Sphinx in 1798, although he didn’t replicate it perfectly. He must have known there was a hole in the top of his head since he had sketched the image of a guy being dragged out. 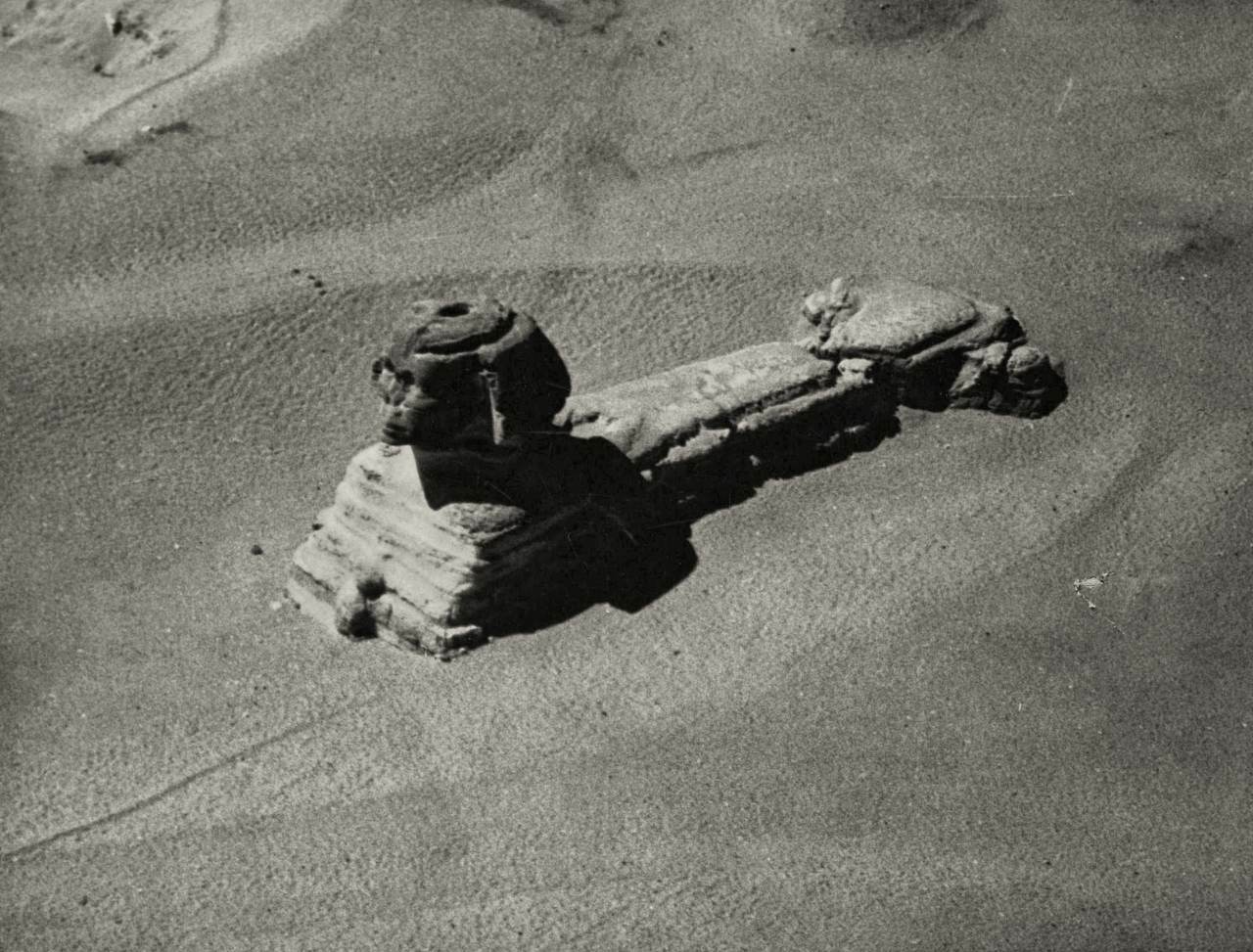 A drawing is hardly evidence, but an aerial shot of the sphinx taken from a hot air balloon in the 1920s revealed that there is such an opening at the top of its head.

According to Tony Bushby in his ” The S̳e̳c̳r̳e̳t̳ in The Bible”, a fragmented Sumerian cylinder tells a story that could easily be interpreted as having taken place in Giza, involving a beast that had a lion’s head with a tunnel entrance hidden by the sand.

A new study now points out that the Sphinx’s body was carved from natural stone when there was frequent heavy rain and this takes us back to the same time that Robert Bauval and Robert Schoch calculated the construction of the Pyramids of the ‘Belt of Orion’, ie, about 10,450 BC.

The Giza complex (the A̳n̳c̳i̳e̳n̳t̳ Egyptian term Gisa meaning “Stone Hewn”) has been sketched since 1665, and some depict two heads ‘peering’ out of the sand, one with female characters, possibly the second Sphinx.

It was an A̳n̳c̳i̳e̳n̳t̳ Egyptian custom to enlist two lions, known as Akerw, outside their doorways for heavenly protection, which would take us right to a mystery mound near the sphinx, which Gerry Cannon (Book: The Giza Plateau S̳e̳c̳r̳e̳t̳s and a Second Sphinx R̳e̳v̳e̳a̳l̳e̳d̳) identified and measured. Is it possible that this mound contains the buried body of a second sphinx?

One would have thought that this mysterious, large, covered shape so close to the sphinx would have been greeted with great enthusiasm by the Egyptian authorities, but Hawass and Mark Lehner didn’t want to hear or pay attention to it, according to one source.

Gerry had contacted someone at a renowned institute in Cairo who had equipment that could detect objects under the sand. This person asked the Supreme Council of Antiquities for permission to investigate the mound, but they did not respond. Apparently, no one else was allowed to investigate the specific area of the mound where we believe a Second Sphinx could be unearthed. No doubt they had a reason for this!

Why would those two Egyptologists be so concerned about the possibility of discovering something that had been lost for centuries? Is it conceivable they don’t want to expose what’s behind that mound? It is illogical to oppose to any type of probe or even a simple aerial image being taken, which may lead to the discovery of yet another great wonder of the world, attracting many thousands more tourists to Egypt.

They don’t even admit to have inspected the mystery mound, and if they had, they would have been the first to admit it. Zahi Hawass appears to have an agenda, which is to maintain the conventional view of A̳n̳c̳i̳e̳n̳t̳ Egyptian history (to not allow anything to disrupt the path of conventional history), regardless of how many new findings contradict what is now considered to be true.

Gerry Cannon has previously hinted at a timetable for constructing the three great pyramids, as well as the Sphinx, which is many thousands of years older than most of us assume. He also identified an undiscovered mound on the Giza plateau, where another sphinx is most likely hidden, based on A̳n̳c̳i̳e̳n̳t̳ documents and data he presented.