36-year-old Briton Tom Ingram from Portsmouth recently visited Loch Ness in Scotland as a tourist and went on a boat cruise around the lake to see the picturesque surroundings of the lake.

Suddenly he saw something large on the sonar screen. According to the sonar data, this something was at a depth of about 121 meters and it was too big for the largest local fish or seal. The length of the object was over 9 meters (30 ft) and it moved in the water.

The most surprising thing is that two years ago, a similar large object was recorded on the sonar screen in the same area of the lake. Then sonar was installed on Ronald Mackenzie’s boat. It showed something large hanging low over the bottom of the lake.

The shape of this creature was the same “smoothly curved” as in the fresh photo from the sonar.

According to Tom Ingram, he decided to take a regular tourist lake cruise from Fort Augustus for the beautiful views of the shores of the lake.

“We were about halfway through the route when we were told that a strange shape appeared on the sonar screen. At first we thought it was a set-up – just as part of a cruise – something created specifically for tourists – but it quickly became apparent that this something was moving in real time and was very large.

“I would classify myself as not someone who believes in the existence of Nessie, I mean, of course we all know that such myths exist, but when you see it with your own eyes on sonar … it took us by surprise.

“At first we were preoccupied, and then very puzzled by what we saw.” 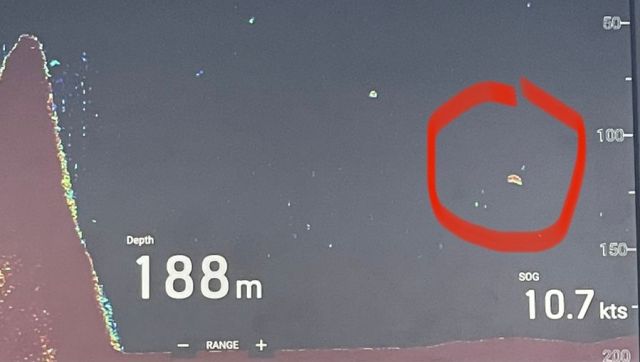 A sonar image showing the alleged monster Nessie, taken in 2020, caused a lot of noise in the press and there was much talk that this is one of the most convincing evidence that something huge and strange really lives in Loch Ness.

The new picture showed that if the first photo could still be called a “technical failure” with a stretch, then the second similar phenomenon in the same area can hardly be called the same mistake.

Leading sonar expert Craig Wallace described the images as “very curious” as both show “large, clear and distinct objects floating strangely close to the bottom of the lake”.