EXPERTS have been left puzzled after an “alien” like creature has been found on a beach in New Zealand. Shocked residents discovered the mysterious skeleton washed up on a beach in the Canterbury region last Saturday. 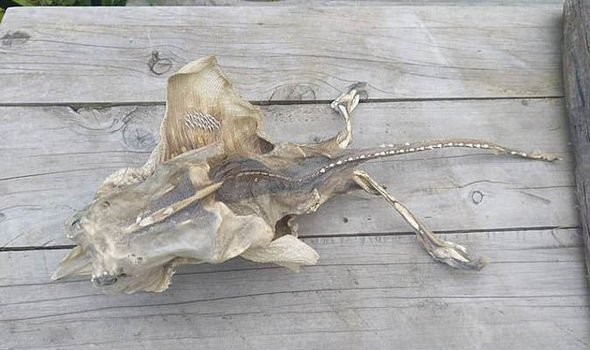 The rotting creature appeared to have two legs and a tail along with sharp fangs and winged claws. Hanna Mary and her mother “screamed” when they found the skeleton during a walk along the Rakaia Huts collecting rubbish. Ms Mary told the NZ Herald: “She found an interesting piece of wood, she picked it up and at the time she yelled out ‘omg’ and I picked up the critter and I screamed louder than she did.

“She dropped whatever she was holding and came running to me.

“My first thought was that it was something alien, but I was more fascinated than anything.”

In a rush to the find out what the bizarre animal was they both took the animal to a taxidermist, but unfortunately he was equally stunned.

She added: “I took it all the way home and gave it to a taxidermist next door to see if he knew what it was but he wasn’t too sure either.

“That why I thought I should reach out and see if anyone else knew what it is.”

With curiosity getting the better of her Ms Mary shared the imaged on social media and it has since gone viral with everyone trying to solve the mystery.

One user said: “I would say a very deep water skate.”

Another perplexed user wrote: “That ain’t no fish!”

Ms Mary said: “I uploaded the photos on Facebook and we were all taking guesses, most people said skate. Mystery Behind NASA Photo With Alien Spaceship Crashed On Mars