I believe that everyone interested in UFOs is looking for the next best UFO sighting that makes sense to them, as well as a better UFO incident than the one they’ve just been watching. If you answered yes, you are no different than the vast majority of UFO seekers. We’re all looking for that one UFO sighting that makes perfect sense, the one that answers questions rather than raises new ones.

Seriously, I’m the same; the only difference is that I’d like to try to track it back to its original sighting or find out if it’s been seen before and what questions were answered then.

I’d also like to know if these people are acting with impunity… Radar stations in the United States, the United Kingdom, and Europe, for example, can tell you if an Ant moves and pretty much anything else in the sky. So, why are these UFOs allowed to go wherever they want, and why aren’t there any Jets scrambled to intercept or at the very least give chase, as seen in the UAP videos? Because if a small plane is on radar and is the first port 9f call for MUFON to investigate, why isn’t anyone doing anything about the UFOs in the sky?

This is an updated version of a previous post I wrote. It’s a postscript (Ps), if you will, a different perspective on the story. With more up-to-date information and details on the origins of the UFO. How did humans have prior knowledge of a UFO sighting twice?

I can’t blame people for not believing Blake Cousins from Thirdphaseofmoon simply because he invited people to come and witness for themselves a real UFO sighting, and thus when two Golden UFO spheres appeared, people said it was two balloons and a staged event – but Thirdphaseofmoon challenged people to recreate it if they could?

Knowing what’s at stake, would anyone really invite people to a bogus UFO event… I’m not sure you know, it just seems too obvious, but if it really does happen, like for real, that’s significant, and I can see how that could be appealing.

But what people really want to know is “how did Blake Cousins find out about it?” and “why him?” Why a Ufology researcher rather than a politician or someone with greater credibility than a mere UFO researcher? Why not watch the evening news on live television? Why not take over all of the television stations?

Blake Cousins was always caught in a “damned if you do, damned if you don’t” situation. So it didn’t really matter what happened because people were always going to criticize it. That’s the sad part: no one saw past that, and no one was willing to give them the benefit of the doubt. 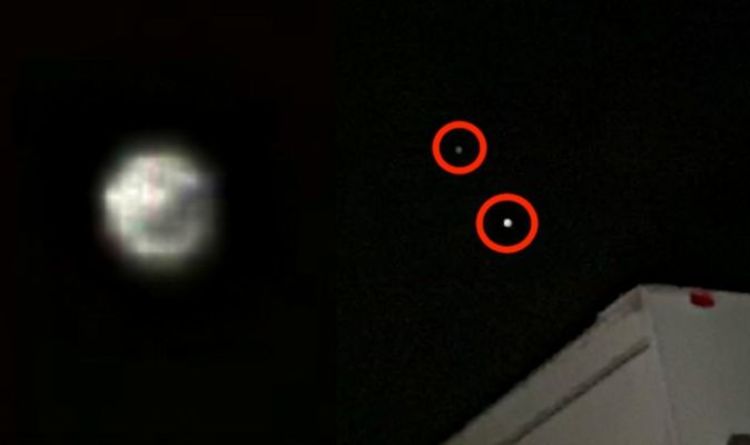 Seriously, some days I get that instinctive feeling from UFO sightings, and I honestly got that feeling that this was genuine the moment I laid eyes on this set of two UFO Spheres. That, or I support the underdogs. I have a tendency to always go with what I believe to be true, or so I thought. I don’t believe in lesser beliefs held by others; all I ask is that you see this for what it is and try not to be swayed by others’ “baseless” opinions. In other words, form your own opinion about the L.A. UFO sighting. 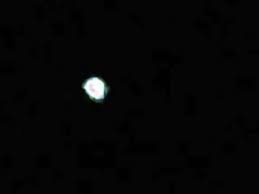 I’ve actually written a very similar UFO post about a 2015 Golden UFO Globe filmed in Sevastopol, Russia. Here’s an image of a UFO Sphere floating above water in a lake; click here to see it. It’s eerily similar. 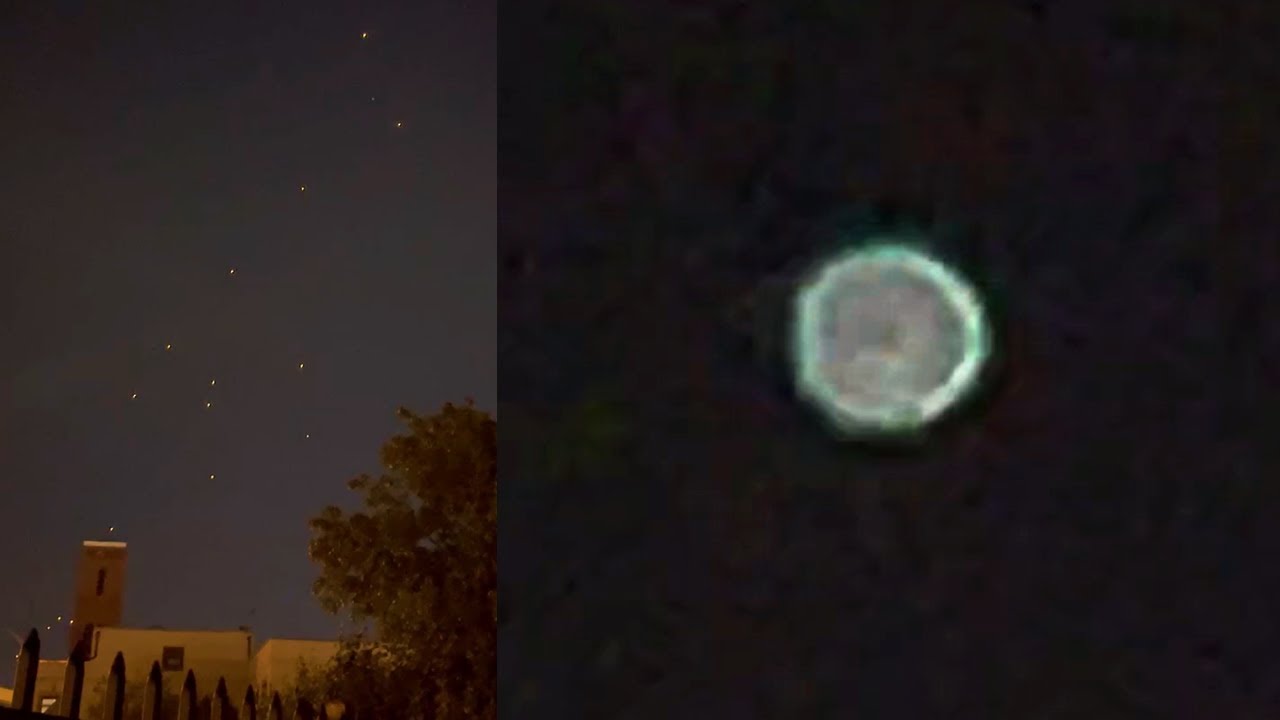 It also has to be worthy enough for you guys because, as I’ve mentioned in previous posts, when I’m in researcher mode, I tend to discover some of the most amazing but lesser known UFO events, which I really enjoy bringing you guys. This one, on the other hand, comes from the YouTube channel Thirdphaseofmoon, which is more well-known (I understand that some people seem to dislike it), but if you can look past the people posting the videos aka Thirdphaseofmoon and just look at the content, that’s a good thing! The following is the complete YouTube video content description:

Thirdphaseofmoon YouTube Channel: Incredible Footage Golden Orbs Hovers Over L.A. On May 19, 2012, Robert Bingham and Thirdphaseofmoon invited the public to witness UFOs, and History was Made! For all the Debunkers who claim it’s balloons, film balloons and see if they look like this! Best wishes.

Just do what I do; I watch a lot of YouTube videos with the sound turned off. It works well for me, especially if you can’t stand the sound of music, voices, or the generalised sounds that many UFO videos have… you know, like clattering around noises from the camera or phone being passed from one hand to the other, and so on. Loud voices in the background, as well as people shouting back and forth at other people in videos with a lot of swearing, can all take their toll. Turn down the volume and, if you can, turn on the captions so you don’t miss anything.

Try to tune out because it’s not worth getting a headache or getting upset about the UFO or the eyewitness antics during the UFO sighting! This UFO video contains a lot of shouting, but it’s actually just the cameraman telling everyone where to look and how many UFOs there are, which is very common in genuine UFO videos. In this UFO encounter, two golden-colored, shiny, spherical-shaped UFOs are flying over the heads of numerous eyewitnesses, all of whom are looking up and pointing at these two golden balls.

It’s certainly intriguing, more so than the vast majority of UFO Orbs flying in the sky right over people’s homes or way off in the distance over nowhere. At the very least, we get a very clear image of one of the Golden Spheres and a fantastic screenshot of both of the Golden Orbs together. I’m just grateful that in the midst of the chaos and confusion, we were able to capture a few seconds of video so that we can freeze frame it and examine exactly what happened, what was filmed, its shape can be determined, and we can catalog them both. Seriously, just for that reason, it’s a fantastic video.

I think I like the multiple UFO eye witness events the best because how does anyone fake something like that in public with so many different people all watching? There’s no way this is a hoax; it appears too random and confusing to onlookers. With obvious fake UFO videos, I’ve noticed that everyone has a role to play, and they all seem to know exactly where the UFO is. This one, on the other hand, is “pure pandemonium,” with a lot of zooming in and out and no one knowing where anything is.

That’s great because it gives us confidence that we’re witnessing an authentic UFO sighting. But I completely agree that someone could be controlling these two globes remotely from behind the camera.

It’s been a long time since I’ve seen a genuine UFO sighting with multiple people watching it (trying to find it in the sky), and it’s very refreshing. See, while looking for these two golden Spheres, the cameraman manages to center them in the center of the lens, albeit briefly, but he does manage to get both of them kinda in the center but just to the left and right of the video scene.

I was able to take some excellent screenshots, and it is from these that we can get a good look at the UFOs.

One of them has a few markings that look like a dark letter K and a piece of metal sticking out from the right side (right side looking at it). I’m not sure what to make of it, but it’s unlike anything I’ve ever seen. It doesn’t appear to be an aerial or a signal receiver that’s extended from it on its side, and the dark-looking letter K, well, that could just be the way it looks in that position as it could be upside down.

It could be anything; it’s all speculation because if it’s Extraterrestrial in origin, how can we come up with a rational answer because it has to be based on something created by humans?

Lee Lewis UFO Sightings Footage: There are a lot of “what ifs,” and all of them could be correct, but they could also be completely wrong!

This is, or it could be, one of those posts that looks awesome, seems great, and checks all the Alien boxes. Is it, however, too good to be true?

I’m pretty sure it’s real, and I’m pretty sure it’ll be real once Aliens get their hands out of their pockets and come say hello to humans. Forget about the scientists and politicians you’ve been dealing with up to this point. You’re better off with real people.