During my visit to England in the summer of 2010 and in July 2011, after several visits to mysterious, fascinating and full of energy places, such as Avebury Stone Circle, Stonehenge, Glastombury, Torre di San Michele etc .. I also visited (as had also happened in 2010) the Wiltshire wheat fields, in search of pictographs.

Unfortunately I didn\\\’t have time to go and see the pictogram of the “Gray with a Pipe”, which appeared in the wheat fields at Cherhill White Horse, also in Wiltshire on 27 July 2011, certainly interesting to see, but the logistical problems, related to the tour, they had taken me to visit another pictogram, like that of Windmill Hill, not far from that of the gray a̳l̳i̳e̳n̳ smoking a pipe. Surely the huge pictogram of Windmill Hill (photo below) did not disappoint expectations and then became the symbol . 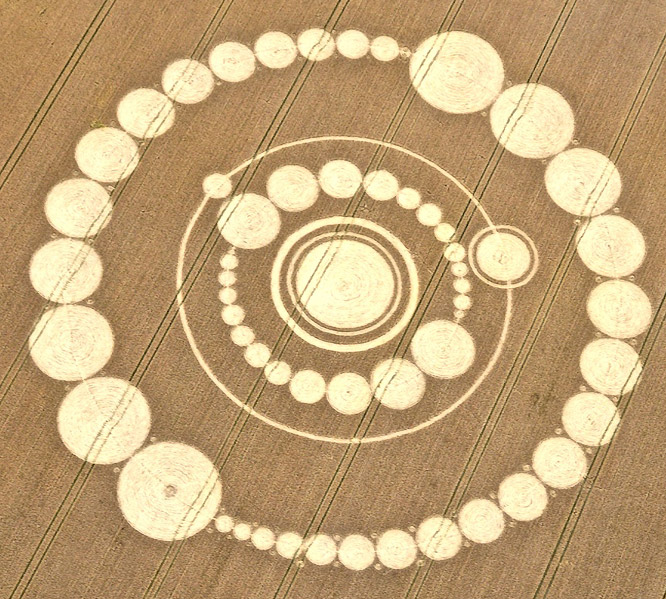 THE SACRED PIPE AND UNION WITH MOTHER EARTH

On the contrary, the crop circle that appeared in the wheat fields at Cherhill White Horse, as can be seen in the photographs taken from above, (photo below) shows the image of an a̳l̳i̳e̳n̳ (the classic “Gray”) smoking a pipe. Immediately after the appearance of the pictogram and after the photographs that the various researchers then posted on the web, the story of the Sacred Pipe or Chanunpa came to mind, an extraordinary religious object full of symbolic meanings that sums up all the religiosity of the Lakota. Sioux. It represents the union between many “opposites” such as the material world and the spiritual world, the masculine and the feminine, heaven and earth. This is the Sioux legend that tells of its origin.

A long time ago, two beautiful young Lakotas had been chosen by their tribe to find out where the bison were. As the men were crossing the bison territory, they saw someone in the distance walking towards them.
Since they were always cautious for fear of enemies, they hid behind some bushes and waited. The figure was now on the slope. To their surprise, the figure walking towards them was a woman. In fact, the Great Spirit Wakan Tanka (Wakan Tanka was the strength, the mystery, the great spirit behind everything) had sent the goddess Whope to Earth to give men the sacred pipe.
After approaching, she stopped and looked at them. They understood that she could see them, even where they were hidden. Her right arm carried something that looked like a stick in a bunch of herbs. Her face was beautiful.

One of the men said, “She is the most beautiful I have ever seen. I want you to be my wife. ”
But the other man replied: “How can you have such a thought? She is extraordinarily beautiful and holy, much more than an ordinary person. ”
Although she was far away, the woman heard them speak. So she said, “Come. What do you want?”
The man who had spoken first went up to her and placed his hands on her. Immediately, from somewhere above, a tornado came. Then a mist arose, which covered the man and woman for a moment. When the mist cleared, the other man saw the woman again with the bundle on her arm. But her friend was a pile of bones at her feet.

The man stood up silently for fear of that prodigy. Then the beautiful woman said to him: «I belong to the people of the bison. I was sent to this Earth to speak to your people. You will now have to carry out a very important mission. You have to go to your boss and tell him to build a tent whose door must face east. On the place of honor he will have to sprinkle some sage and behind the fire pit he will have to place a bison skull. At dawn I will arrive at the village. ”

Everything was arranged according to what had been requested by the goddess Whope who made her appearance in the village on time at dawn, greeted by a large crowd. She carried a torch in her right hand and a red pipe stove in her left, her gifts were wrapped in bundles of sage. She removed the bundle of plants from the gift she was carrying. The gift was a pipe made of red stone. The very small profile of a bison calf was carved on it. She entered the tipi and sat in the seat of honor said that the Great Spirit was very pleased with the Lakotas, that he considered them faithful and reverent and that, therefore, they had been chosen to receive the pipe she had brought for the good of all. humanity. (The divinity knows how to be good and she knows how to give happiness to those who deserve it, from this point of view she remembers the “Western” God, even if the type of religiosity is different).
She gave the pipe to Bull Who Walks Standing and taught him the prayers she had to say. “When you pray to the Great Spirit, you must use this pipe during the ceremony. When you are hungry, remove the pipe from its packaging and place it in the air. Then the bison will come where men can hunt and kill them easily. Thus children, men and women will eat and be happy. ”
The beautiful woman also told him how people should behave in order to live peacefully together. She taught them the prayers they had to say when they addressed their mother Earth. She also explained to him how they should decorate themselves for the ceremonies. THE EARTH IS YOUR MOTHER

\\\’The Earth,\\\’ she had said, \\\’she is your mother. Thus, for special ceremonies, you will decorate yourself like your own land: black and red, brown and white. These are also the colors of the Bisonte. Above all, remember that this is a peace pipe. You will smoke it before all ceremonies. You will smoke it before making the treaties. She will bring peaceful thoughts into your minds. If you use it to pray to the Great Spirit and Mother Earth, you will be sure to receive the gifts you ask for. ”
He stayed in the village for four days and before leaving he lit his pipe, offered it to the sky, the earth, the four winds, smoked a mouthful and then passed it to the chief. Finally, she came out of the tent while the whole village was there watching her; outside the opening of the circle she stopped for a moment and touched the Earth. In an instant she transformed into a black bison calf. She touched the Earth again and then took the shape of a red bison calf. A third time he touched the Earth and became a brown calf. The fourth and last time she transformed into a pure white bison calf, white, without a blemish. Then he walked north and disappeared far away on a hill.

Standing Bull kept the peace pipe carefully. She called all the children of the village together and untied the bundle that wrapped the pipe repeated the lessons that the woman had taught him. And he used it in prayers and other ceremonies until she was over a hundred years old.
When he got weak, he threw a big party. During this feast he gave a pipe and teachings to a worthy man. Likewise the pipe has been passed from generation to generation. \\\’As long as the pipe is used,\\\’ the beautiful woman had said, \\\’your people will live and be happy. As soon as it is forgotten, people will perish. ”

THE DUALITY OF THE SACRED PIPE

The Sacred Pipe is divided into two parts, the torch, made with maple wood that symbolizes the tree of life and the stove, made of a particular reddish-colored stone found only in present-day Minnesota called Inian Sha, it symbolizes what the world is.

The “duality” of Chanunpa is equally sacred, in fact it represents the union between many “opposites” such as the material world and the spiritual world, the masculine and the feminine, heaven and earth. When the Sacred Pipe is not used, the two parts must be strictly separated and well preserved in the decorated buckskin (or deerskin).
The feathers used to join the two parts represent the birds, so that they too can bring their prayers to Wakan Tanka. The bison engraved in the stone of the stove symbolizes all the quadrupeds and the game indispensable for the life of the natives.

Here the creators of the Crop Circle are sending us a message that speaks clearly: we must respect Mother Earth and unite with the spiritual world. Many know this sacred object as “Pipe of Peace”, it is true, it can also be used for this but not only, as you have noticed it is an indelible signature, an object of prayer but also a design that transmits “sacralization” and that allowed to some native peoples, to live in complete harmony with the “goddess” nature who in return gave them all that was necessary to live. Signs of Alien Life Will Be Found by 2025, NASA’s Chief Scientist Predicts