After the Blessed Virgin Mary and her assorted shrines and grottoes, evangelical Catholics in Canada and United States flock to and draw inspiration from the North American Martyrs’ Shrines in Midland, Ontario and Auriesville, New York; where collectively six clerics and two `donné’ or lay people were killed, supposedly `in odium fidei’ (in hatred of the faith).

After World War Two, Jesuit showman and strong anti-communist Daniel Lord produced a pageant in the large auditorium in Auriesville. It presented Native Americans dancing around pyres of burning wood, ready to slay the Jesuit priests in that grisly way we all heard of growing up Catholic in the 1960’s and before. More recent representations show pacified native people in outrageously inaccurate dress.

Father John Wynne, the Auriesville shrine’s most zealous promoter, said that the canonization of the eight men in 1930 was a Godsend to the American Catholic church. It gave stature to a relatively small politically powerless religious body which was suspect in matters of doctrinal purity (`Americanism’ was one of the modernisms that The Papacy was obsessed with in the late 19th Century) by the hierarchs in Rome and under-represented in councils and synods.

In the early decades of the 20th century, first generation American Catholic immigrants feeling the sting of WASPs (White Anglo-Saxon Protestants) all around them, could now believe themselves to be fully native sons and beloved children of the True Church. This is quite ironic, since the eight men were all French and most died in Canada.

What Impact Do the Martyrs’ Shrines Have Today?

The Martyr’s shrines and the devotional cult that has developed around them is relevant to the Roman Catholic Church’s ongoing dialogue and healing with indigenous peoples, since it was one specific native group, now known as the Haudenosaunee, but formerly feared and reviled as `The Iroquois’ , that traditionally have been charged with the death of the eight men. However, in jurisprudence and courts of law, there is a term called `justifiable homicide’.  We shall see how it may be applied here.

Recommendations #58-60 in the Canadian Government’s `Truth and Reconciliation’ Commission report, where the Pope himself is called to issue a formal apology to native peoples in Canada, relates to the Martyrs’ Shrines. The phrase `to respect Indigenous spirituality in its own right…. and prevent spiritual violence’ refers to the activities Catholic clerical orders such as the Recollects, Sulpicians, and The Society of Jesus ( Jesuits) engaged in hundreds of years ago in the untamed wilderness of North America.

No formal study has been done about the influence, among Catholic and non-Catholics alike, that the Martyrs’ Shrines have had on shaping attitudes towards not just the Iroquois but all indigenous people, leading indirectly to intergenerational trauma and then to everything from biased court verdicts, missing aboriginal women, and polluted water on Northern reserves.

The Martyrs’ Shrines have yielded thousands of cultural artifacts – from tea sets to commemorative plates, inscribed rosaries, pennants, medals, and postcards over the decades. 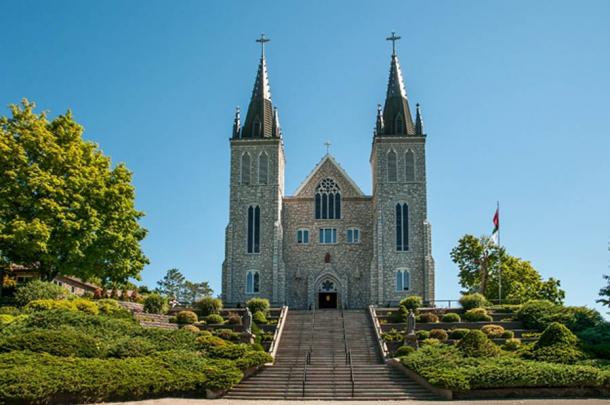 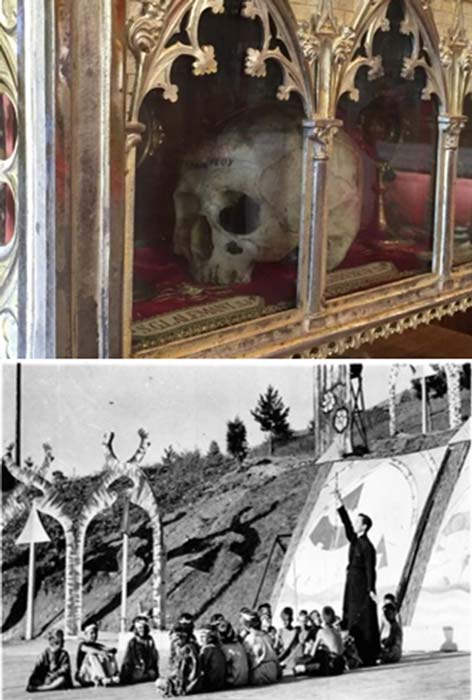 Visitors recall statues and paintings pitting the “dreaded savages” against the “noble Jesuit priests” that are apparently now locked away in the labyrinth of rooms and corridors underneath the Midland shrine. This statue in Orillia says a great deal just by the different placement of the figures.

Collectively, can all of this have added to a negative and skewed impression of indigenous people? It is a problem which has accrued over the years and one that the Catholic Church must now do its part to correct.

In 1632, the Jesuits were given the sole task of ministering to aboriginals in New France. The most promising group was the Iroquois speaking Wendat people (`Dwellers of the Peninsula’) traditionally known as the Hurons (from French `hure’ meaning ruffian or savage), who resided in palisaded villages of up to 2,000 people in a rectangle of land measuring a mere thirty-five miles (56.33 km) from east to west and twenty miles (32.19 km) from north to south in present day Simcoe County in Ontario, Canada.

The Wendat were first contacted by the explorer Samuel Champlain in 1615, who reported the presence of 30,000 sedentary people tilling the soil for most of their food supply. They were organized, like the Iroquois to the south, in a Confederacy consisting of four tribes.

The discovery of the Wendat Nation must have shocked the Europeans, since they were used to interacting with nomadic Algonquin’s and Montagnais, who largely lived on roots, fish caught from streams, and small animals. The Catholic clerics who accompanied Champlain envisioned a rich harvest of worthy souls.

Although their numbers had been depleted by disease, mostly smallpox, which they had no natural immunity to combat, the Wendat were still a proud, fierce, entrepreneurially minded people with impressive physiques and sophisticated spiritual practices, including the remarkable `Feast of the Dead’. In the end, only a few Christianized Hurons, who were pragmatists rather than true believers, resigned themselves to the fact the Europeans were the wave of the future. The Jesuit project was a failure. 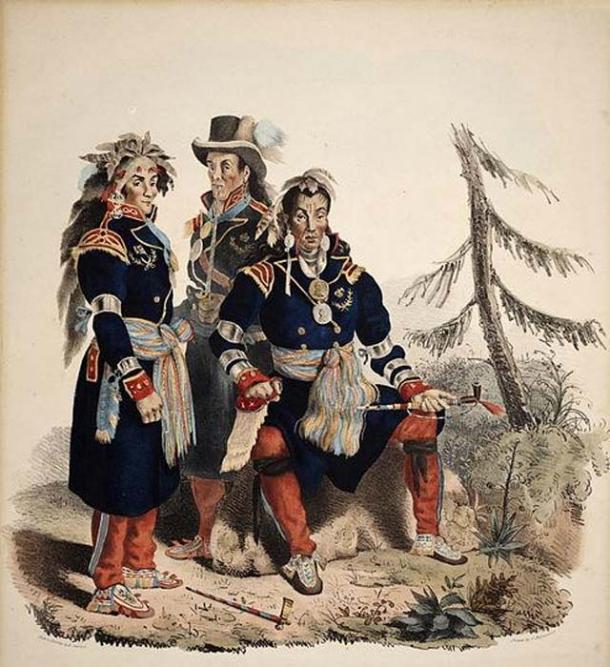 The Catholic religion was institutional, hierarchal, and dogmatic, while the Wendat’s was spiritual, animistic, and non-hierarchal. However, there appeared to have been a Catholic/Wendat hybrid religion in which elements of both traditions were melded together.  This acculturated Catholicism still exists in parts of Mexico and India and is enthusiastically embraced by Pope Francis.

In Canada’s First Nation, ground-breaker Olive Dickason, whose 1970 McGill University doctoral thesis was the first dissertation ever written on First Nations people in Canada, claims that it was the economic benefits of the fur trade that both the Wendat and French sought. Over half of the furs sent back to Europe came through the Wendat and their trading connections with northern and western tribes. It was Champlain who was insistent upon having the missionaries present.

Dickason argues the Wendat were likely to become Christian because they could then get the same price for their furs as French traders. It must be said here that the only reason we know anything about the Wendat and their kin the Petun (Tobacco) and Chonnonton (Neutrals) is due to the annual reports that the Jesuit priests in the field sent to the Superior General in Quebec each summer, who then sent them onto the Provincial of the Order in Paris. These have been compiled in twenty-three volumes called The Jesuit Relations and Allied Documents and may represent the most precise detailed ethnographic record of any indigenous people so early in the `contact’ period.

Page after page provides meticulous detail on how the Wendat went to war, how they dressed, how they practiced slash and burn agriculture, and on the nuances of the Huron language. All of this is broken by earnest lamentations on the seemingly impossible task of conversion.