“I found this paper absolutely fascinating,” said Kristin Krueger, a dental paleoanthropologist at Loyola University Chicago, as quoted by Science. “From what I can tell, this is solid evidence … that modern humans made it to Europe earlier than thought.”

The French rock shelter finding also reinforces what has been established, namely that H. sapiens and Neanderthals co-existed and lived contemporaneously. This overthrew the earlier held notion that the arrival of H. sapiens in Europe 40,000 years ago triggered a mass extinction of Neanderthals.

This significantly deepens the known age of the colonization of Europe by modern humans,” said Michael Petraglia, an expert on prehistory at Germany’s Max Planck Institute for the Science of Human History, commenting on the importance of the current study.

“We’ve often thought that the arrival of modern humans in Europe led to the pretty rapid demise of Neanderthals, but this new evidence suggests that both the appearance of modern humans in Europe and disappearance of Neanderthals is much more complex than that,” said study co-author Professor Chris Stringer, also a research leader in human evolution at the Natural History Museum in London.

The Grotte Mandarin rock shelter has layers of Neanderthal occupation, within which layers of H. sapiens occupation were also identified, including the Homo sapiens baby tooth. However, the researchers have agreed not to try and extract DNA from the tooth , in a bid to protect its fragility. A prior attempt at extracting DNA from a horse’s tooth found at the shelter proved unsuccessful and destroyed the fossil.

What is particularly interesting is that the layer of H. sapiens occupation was multiple, firming the theory of mutual co-existence of both groups of humans. In fact, through analysis of soot deposits in the cave by Ségolène Vandevelde, an archaeologist at the University of Paris-Saclay and author on the paper, it was determined that only one year passed between the time a group of Neanderthals moved out, and a group of modern humans settled in.

This settlement lasted 40 years, before it was replaced by a Neanderthal group, who occupied it for another 12,000 years, only to be replaced by H. sapiens , who would then settle for a few hundred years, reported the  New York Times . Clearly this pattern of Neanderthals and then Homo sapiens and then Neanderthals and so on suggest co-existence, but also shows that the process of human evolution was not as black and white as earlier thought. It took several thousand years for the Neanderthals to vanish. Likely, Neanderthal extinction occurred in localized pockets first, rather than in a large sweeping erasure. 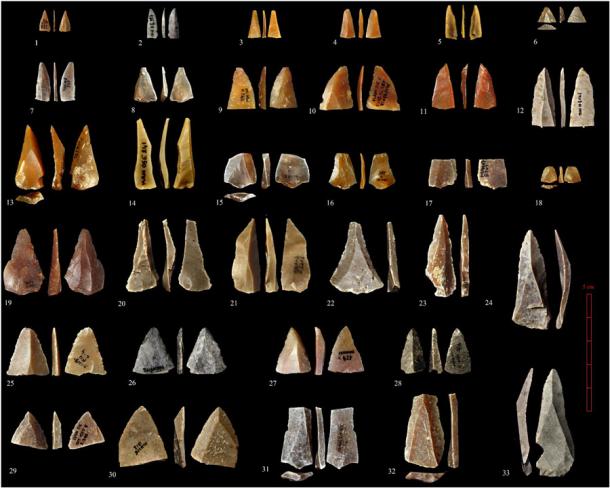 The possibility of this being one of the “most important natural migration corridors of all the ancient world” has also been posited by Ludovic Slimak, a lead author of the study. The presence of similar tools 3,000 kilometers (1,900 miles away) in Lebanon suggests that perhaps a category of modern humans shared common cultural history across the Mediterranean Sea. The Rhone river potentially played a crucial linking role between the coast and continental Europe.

A report in Nature also helps put the find into context, explaining that some researchers are not so sure that the stone tools or the tooth were from Homo sapiens. “I find the evidence less than convincing,” says William Banks, a Paleolithic archaeologist at the French national research agency CNRS and the University of Bordeaux.

Sahra Talamo, a researcher at the University of Bologna in Italy who was not involved with the research, expects the new paper to spur debate, particularly since the tooth’s genetic material has not been sampled. Dr. Talamo said she understands why the authors could be worried about partially destroying a unique human remain. But she concludes, “the only way to avoid speculations and create false scenarios is to directly date the specimen.” Keyhole: Unlocking the Secret Geometry of the UFO Enigma