Seriously, it’s this real likelihood of most stone tablet’s been created for the tourist industry that puts me right off from even entertaining the idea that these are real! I’ll be totally up front and honest with you, I really do think that someone’s sat in the Sun in Mexico carving out a living by faking these stone tablet reliefs and depicting Ancient A̳l̳i̳e̳n̳ being’s. 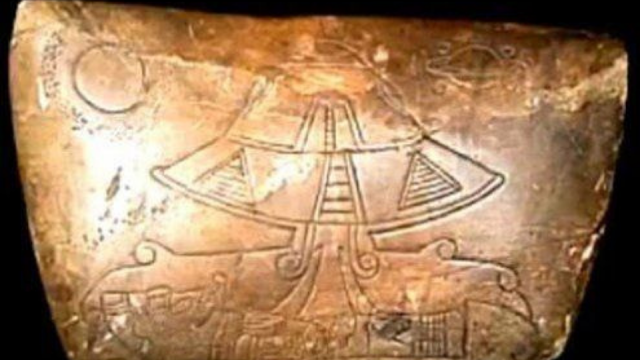 Ancient stone tablet’s depicting a modern day phenomenon (which by the way it just so happens that it can’t be proved either way) carved by someone onto these stone tablet’s and knowing that it’s fake, is very wrong… Even with 100 of these stone depictions it’s a hard sell to ask people to believe that they are real. But, on the other hand, there’s that slight, slim ochance it could be real so someone should look into them and low and behold, as it turns out someone has looked into it. Continued below this quote.

A̳l̳i̳e̳n̳ U̳F̳O̳ Sightings quote: Several families of Ojuelos city in the province of Jalisco, Mexico, have been collecting for about 50-60 years a total of 400 artifacts extraordinary, with the dream of one day open his own museum, and publicize to the the public such an amazing objects. 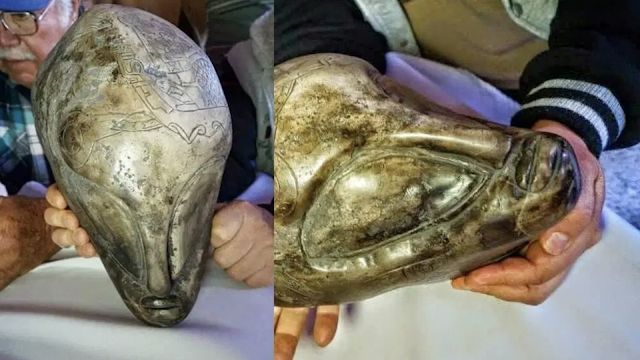 Here’s an A̳l̳i̳e̳n̳ Alphabet, have fun with working it out. I’ll give you the link to Byrne Robotics Forum which is where it was developed it. It’s actually in it’s easiest form to work it out, but I thought that this would cheer you up (not that you need it) check it out, it’s actually really good.

Continued. But even this is subjective and questionable because it’s all based on opinions and assumptions with little to no scientific method applied.

Trying to date a piece of stone is absolutely stupid because it’s an A̳n̳c̳i̳e̳n̳t̳ stone just like all the other stones so they try to date the method of carving or the style of carving to a specific period of time or to a dynasty for example or an era or tribe? Lot’s of cultural and social styles can be identified and dated. A bit like specific architecture from the A̳n̳c̳i̳e̳n̳t̳ to modern and all the styles in between themwhich has a clear style which can be dated to a specific time. Some styles are influenced by or styled on the works of, heavily influenced etc etc. But A̳n̳c̳i̳e̳n̳t̳ stone tablet’s with depictions of U̳F̳O̳s and A̳l̳i̳e̳n̳ being’s on them, we know it can be faked and we know it can be “created to look like anything” that the fakers want it to look like? Let’s take Egypt for instance which Egyptian entrepreneurs like to try and sell papyrus paper with A̳n̳c̳i̳e̳n̳t̳ Egyptian hieroglyphic spells or writings with symbols and characters from A̳n̳c̳i̳e̳n̳t̳ famous rulers like Tutankhamen, all with Egyptian hieroglyphs. It’s all deliberately made for the tourist industry.

So, why am I writing about these stone tablet’s? Why am I entertaining something that I whole heartedly believe is a tourist gimmick? Because of my own conclusion in an earlier post that I’d written, I had concluded that we should give all of the U̳F̳O̳ sighting’s and claims of A̳l̳i̳e̳n̳ sighting’s, A̳l̳i̳e̳n̳ encounters including tangible evidence and possibly A̳l̳i̳e̳n̳ abductions including crop circles etc.  It should all be given the benefit of the doubt,  right. I mean who am I to say “no” what you experienced was not what you experienced?

See, it’s this blatant disregard of people’s experiences and the way I lorded it over these people and swept aside peoples U̳F̳O̳ encounters or A̳l̳i̳e̳n̳ incidents just because I couldn’t understand what it was they had experienced.  So because it’s hard for me to understand that person’s experience, I used to simply dismiss them by saying they are wrong, I’d say things like it’s fake or it’s a hoax. That in itself is saying “your lying”. Having a long look at myself and at what I actually say about U̳F̳O̳s and subsequently how it effects people, well that’s just awful.

I do believe that we should always have an open mind, a kind of benefit of the doubt attitude because of the nature of A̳l̳i̳e̳n̳ conspiracies and how it’s widely perceived by the mainstream media and “some family and friends” you knowwho they are, right. Why would we want to act like them? 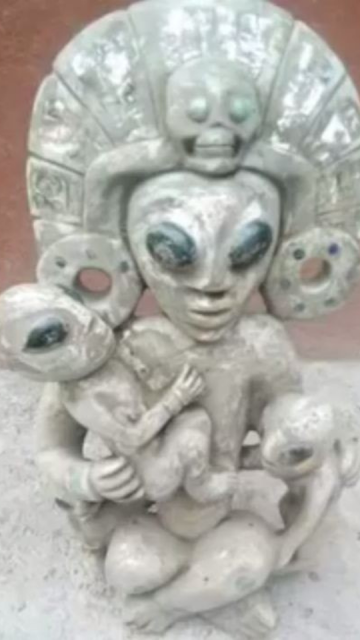 This amazing depiction above is what modern day people would immediately call an A̳l̳i̳e̳n̳ Grey mother with her child. So if it’s an A̳n̳c̳i̳e̳n̳t̳ stone sculpture  depicting a modern day A̳l̳i̳e̳n̳, what’s the chances that it is actually real and not a fake for the tourists? Like I said, It’s supposed to be an A̳l̳i̳e̳n̳ mother and her A̳l̳i̳e̳n̳ child sculpture that was apparently found in Mexico. Don’t forget that most if not all of the information with these is little to none existence and what does is dubious because of the nature of the whole Ancient A̳l̳i̳e̳n̳ conspiracies.

Below image:This is an obvious U̳F̳O̳ depicting an A̳l̳i̳e̳n̳ entity or it’s a fully functioning craft which was used by the Ancient Peruvians or A̳l̳i̳e̳n̳ being’s. 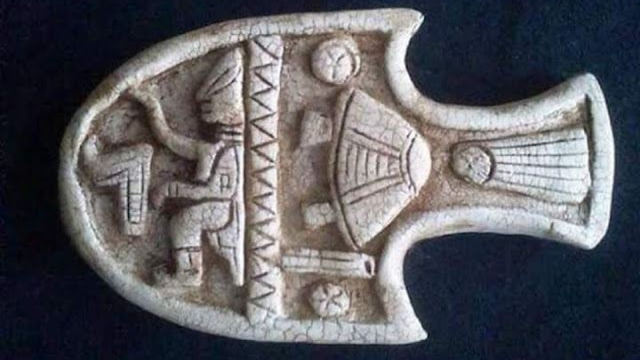 I hate it when I think I’m having a serious conversation with someone I know, only for it to turn into a joke, poking fun at U̳F̳O̳ believer’s, and then there’s the biggest insult of all, that would be the “yeah but people who believe in U̳F̳O̳s are all bonkers”. They’re part of the tinfoil hat brigade or “not long ago, people was actually put in mental institutions for talking about A̳l̳i̳e̳n̳’s or U̳F̳O̳s”. It’s almost like people enjoy bringing up the insults and indirectly aiming them straight at you, but I understand why, because it’s all they know about it. Think about it, if they haven’t thought past the insult then they will only know to insult people. It speaks volumes about a lot of things if you wanna go deeper.

Anyway, stone tablet’s can easily be faked as long as the person carving the tablet’s can kinda get it to resemble an A̳l̳i̳e̳n̳ Grey. That’s all it takes, add a gullible tourist and there’s nothing stopping it then sitting on a shelf in Basingstoke in the UK or sitting on some shelf in a man cave in Texas. Then someone decides to put it in a video titled “A̳l̳i̳e̳n̳ Grey etched into A̳n̳c̳i̳e̳n̳t̳ stone tablet found a cave in Afghanistan or Egypt. Seriously, it’s that blooming easy. And because it’s that easy, you can bet your bottom Dollar that some idiot is gonna do it. That’s why I’ve always resisted writing about A̳l̳i̳e̳n̳ carving stone tablet’s. But, some are so convincing and there’s chance that I’m just being a bit suspicious of what can happen as opposed to what does really happen? If I give it a chance (that’s why I’m doing this post) at least I can say I’ve given it a chance and at least I’ve looked into it. 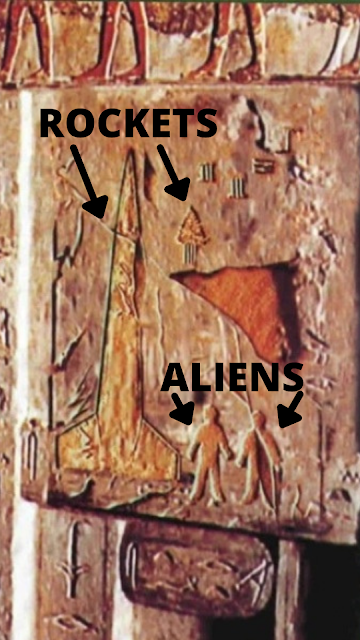 Here’s a great video about the stone carved tablet’s and statues that are depicting Ancient A̳l̳i̳e̳n̳ being’s by TheBeginning IsNear YouTube Channel:

Please share your thought’s and opinions also any ideas that you might have about this amazing Ancient A̳l̳i̳e̳n̳ being’s in stone. I’d also appreciate it if you could share this post with someone who you think would appreciate it, cheers. NASA’s satellites have discovered water on the moon.