The first photographs from the flybys are expected to be available for viewing on the evening of August 10th.

Spacecraft often use the gravity of planets to correct their orbits with minimal fuel consumption. The spacecraft of the European Space Agency BepiColombo and Solar Orbiter are no exception. Both interplanetary stations use Venus for gravity assist and will carry out their Venus flybys almost simultaneously next week.

Everything you need to know about the two upcoming Venus flybys

The European Space Agency (ESA) reported that the Solar Orbiter will carry out a gravity assist on August 9, 2021, and BepiColombo on August 10, 2021. The time difference between events will be 33 hours. Scientists will have an unprecedented opportunity to explore Venus from two different locations at almost the same time.

The Solar Orbiter will be the first to reach Venus. It will pass quite far from the planet at a distance of 7,995 kilometers.

The automatic interplanetary station BepiColombo, which is on its way to Mercury, will reach its minimum approach point with Venus a day later and will pass at only 550 kilometers from the surface.

On its way to Mercury

The spacecraft needs to complete a long series of gravitational maneuvers in order to extinguish its orbital speed and enter orbit around the first planet of the Solar System. 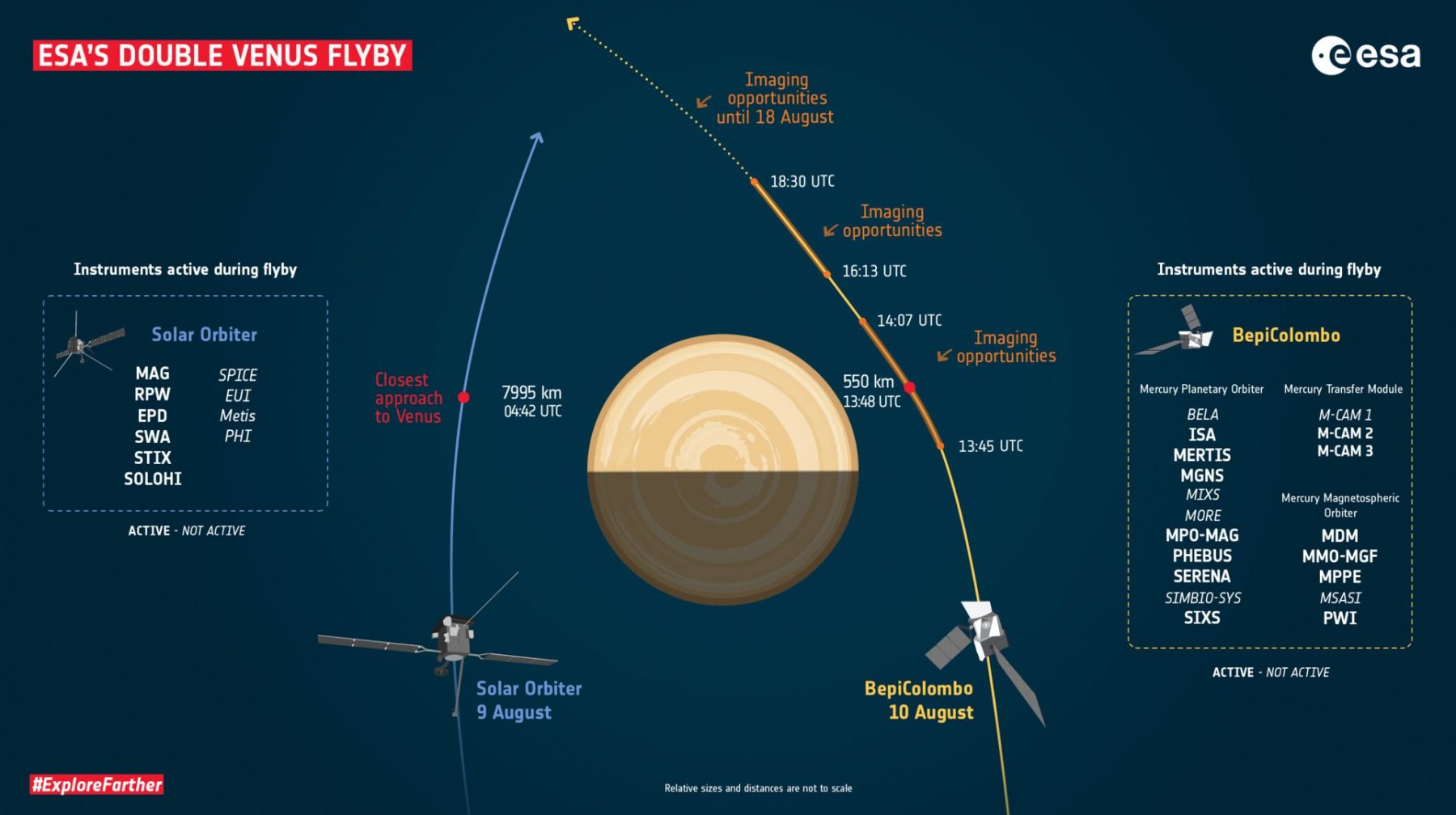 Will we receive images from the Venus flybys?

It is worth noting that high-resolution imagery during these passages is not envisaged. The Solar Orbiter is constantly deployed with a heat shield towards the Sun. The screen has special “windows” with opening shutters that allow onboard cameras to photograph the surface of our star. But because of this design feature, the probe will not be able to take pictures of Venus.

Black and white photos from BepiColombo

Automatic interplanetary station BepiColombo will be able to take photos of the planet with 2 onboard cameras. Thanks to this, we will be able to obtain black and white images with a resolution of 1024 by 1024 pixels.

When can we expect the first images?

The first photographs are expected to be available for viewing on the evening of August 10th.

Will the spacecraft “meet” at some point?

Both automatic interplanetary stations are moving at tremendous speeds relative to each other. Therefore, the nearest distance between BepiColombo and Solar Orbiter will be more than 575 thousand kilometers. They will not be able to “see” each other.

BepiColombo will perform six gravity assist maneuvers near Mercury. During the seventh maneuver, the spacecraft will enter orbit around the planet closest to the Sun. Then, it will begin the significant stage of its mission to study the planet.